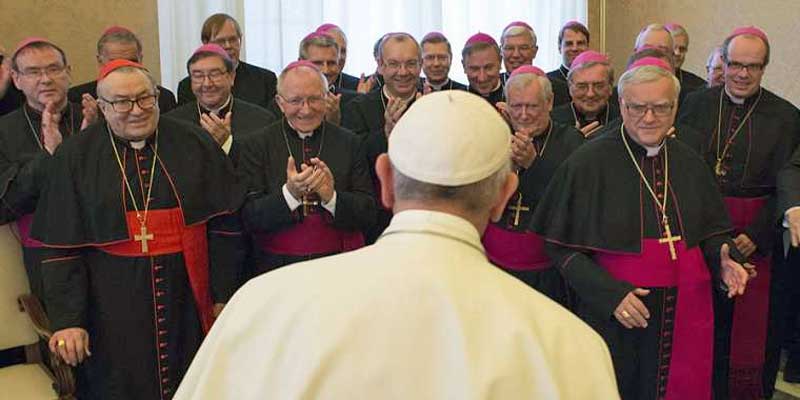 Munich Cardinal Reinhard Marx, the president of the German Bishops’ Conference, has called celibacy and Catholic sexual morals a – quote “encumbrance we have to get rid of” because they – quote – “impede us to go into the future.” Marx said this talking on Saturday to a Council of lay-people of his archdiocese. Marx belongs to Pope Francis’ Council of Cardinals. He makes 13.000 dollars a month, lives in his apartment for free, and uses a BMW 730i with a driver, also for free.

The influence of the German bishops extends far beyond Germany. Through their charitable organizations Renovabis for Eastern Europe and Adveniat for South America they spend every year over 70 million dollars for projects in these countries. With this money, they extend their influence into vast parts of the Church. The German Bishops are also among the main sponsors of the Vatican.

During their last conference, the German Bishops decided to institute what they call “a synodal way”, a de facto synod where they plan to challenge important tenets of the Catholic Faith. Marx uses cover-up language calling the synod – quote – “an important step in order to believe that a development of doctrine is possible in the Church.” The term “development of doctrine” has been used as a euphemism meaning the introduction of mainstream-Protestant teachings that contradict the Bible, Tradition, and morals.

Cardinal Marx said explicitly – quote: “We do not need to wait for Rome, we have to go our own way.” And, “Why not a certain pressure, why not to show a certain will to change? Otherwise, nothing will ever change.” Like in the case of Amoris Laetitia, the German bishops have already introduced the changes they ask from the Church. The dioceses in Germany is among the most unsuccessful and run-down local Churches in the Western hemisphere. It can in no way serve as an example of renewal.