Complicit Clergy is a project of the Lepanto Institute.

In late July 2018, a small group of Catholic laymen gathered to discuss the Theodore McCarrick sex scandal. A mix of emotions was in the room that day: sorrow, frustration, anger, disappointment and disgust. How was it that Theodore McCarrick had been allowed to abuse so many young men over multiple decades?

The United States Conference of Catholic Bishop’s 2002 Charter for the Protection of Children and Young People was a failure, possibly by design. The bishops had consciously removed themselves from the scope of the “zero tolerance” policy. Since then, they have allowed the moral rot in the hierarchy to fester.

As is often the case, sexual perversion is often accompanied by other sins. Where you find sins of the flesh you will often things like fiscal corruption and perversion of the faith.  That is why we have decided not to simply limit our coverage to sexual abuse. 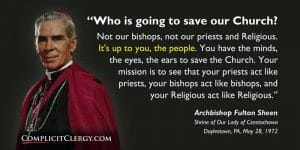 Bishops can no longer be trusted to police themselves. As Bishop Fulton Sheen prophetically stated in 1972, it will be up to the laity to help save the Church.  This website is our first contribution towards working to cleanse the Church and restore Her credibility. We seek to identify those in authority who have forsaken their responsibilities to act in the face of corruption and force them to resign their offices. We entrust our efforts to the patron saint of the United States, Mary our Mother. 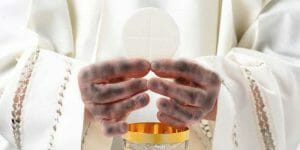 The Catholic sexual abuse scandal is an indicator of a much deeper problem in today’s hierarchy — a lack of faith, holiness and accountability. Which priest, who truly believes in a just God could commit these heinous acts? And which bishops would allow these crimes to go unchecked year after year? It’s difficult to believe that anyone who truly believes in a just and mighty God could be a party to such atrocities. Some bishops are trying to limit the discussion to the sexual abuse of minors only, as if the abuse of priests and seminarians somehow doesn’t rise to the level of a serious offense. Nothing could be further from the truth. All clerics who receive the Sacrament of Orders, either implicitly or explicitly, make an oath of chastity. Any serious transgression in the matter of this vow is a grievous sin. Furthermore, for a bishop to use his office as a spiritual father to lead children or adults into sexual activity is a monstrous sacrilege and cries out to heaven for justice.

As Phil Lawler writes in his book The Faithful Departed:

The same corruption that produced the sex-abuse scandal, the greatest crisis in the history of American Catholicism, remains widespread in the Church today. Indeed the corruption is more firmly entrenched now than it was in 2002, because the hierarchy has refused to acknowledge the most serious aspect of the scandal: the treason of the bishops.

For churchmen to systematically conceal crimes against the faithful, select and advance sexually deviant clergy and then lie to the public about their culpability suggests a serious culture of corruption in the Church.  This problem is not limited to the United States, as evidenced by recent reports involving bishops from Australia, Austria, Chile, Honduras and Italy.

Past Response to the Failure of Bishops 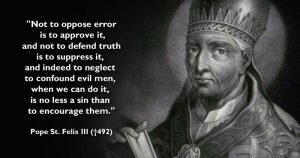 How did saints of the Church respond to similar scandals of the past?  Look to St. Peter Damian:

“Listen, you do-nothing superiors of clerics and priests. Listen, and even though you feel sure of yourselves, tremble at the thought that you are partners in the guilt of others; those, I mean, who wink at the sins of their subjects that need correction and who by ill-considered silence allow them license to sin. Listen, I say, and be shrewd enough to understand that all of you alike are deserving of death, that is, not only those who do such things, but also they who approve those who practice them.” — St. Peter Damian 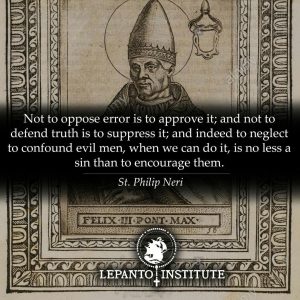 We Must Not Be Complicit

Faithful Catholics must rally courageous clergy who, up until now, have been intimidated or coerced into silence, to step forward and help to cleanse Christ’s Church.  Here are some specific actions we can take to begin the process:

There Are Many Good and Holy Clergy

We must remember that the current crisis was created by a minority of clergy. There are many good and holy Catholic deacons, priests and bishops who are deeply saddened, angered and frustrated by this crisis. We need to continue to support and pray for these men and share with them your appreciation for the work that they do.

The Church Shall Endure

The Catholic Church has endured many crises throughout its 2000 year history. This scandal is no different. Jesus promised that he would send the Holy Spirit to protect the Church. We cannot allow the sins of some clergymen to lead us into sin by losing hope in the promises of Christ (see this homily by Fr. John DeCelles). Resist the temptation to leave the Church. Instead, offer your anger, disappointment and sadness as a sacrifice to Christ in reparation for the sins of the clergy and the restoration of His Church here on earth.