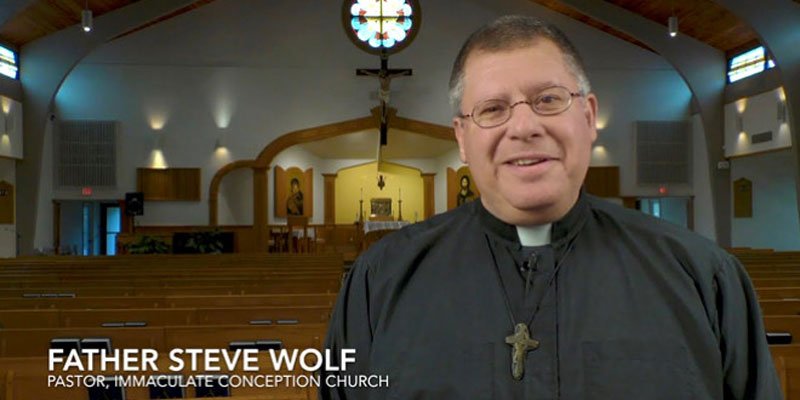 Like many Catholic faithful, some parishioners at Immaculate Conception Parish in Clarksville, Tennessee, have simply had enough.

Their parish pastor, Fr. Stephen Wolf, is openly “gay.” He just got his fifteen minutes of fame as one of the subjects presented in the recent New York Times piece on “gay” priests. And Wolf is using his position in his parish and the larger community to undermine the Church’s teaching on homosexuality.

Several parishioners tried to take appropriate action—they met with their pastor to dissuade him from this pathway. He was not dissuaded. So, they went to their bishop, Bishop J. Mark Spalding of the Diocese of Nashville. To date, Spalding has not properly addressed this grave scandal and has effectively left deeply concerned parishioners to fend for themselves.

What’s the big fuss about Fr. Wolf? Maybe it’s his vanity-press booklet “Gay Respect in the Good News.” Maybe it’s his association with dissenting Catholic groups like New Ways Ministry. Fortunate Families, and Equally Blessed, or with other non-Catholic groups like “PFLAG” and the active LGBT agenda-pushers in the heart of the Bible-Belt community of Clarksville. Maybe it’s the fact that, despite claiming to a parishioner that he thinks he was “born gay,” it wasn’t until he “discovered” he was “gay” at age 33 that Wolf decided to enter the seminary. Maybe it’s the fact that Wolf led a retreat for self-identifying “gay” clergy in 2017, ironically titled “Following Jesus in Holy Honesty.”

But perhaps the biggest problem in all this is that he let his bishop (the late Bishop David Choby, who died in 2017) know he was “gay but celibate” more than a dozen years ago, and his bishop did nothing to properly address that admission.

Wolf says that in seminary he had effectively remained “in the closet” despite the astonishing fact that his seminary’s vocation director, rector, and spiritual director, as well as some seminarians, already knew he was “gay” because “I was counseled in the seminary to see this as part of the sacred truth of who I am and no one else’s business.” But that changed after the release of the 2005 Vatican document stating anew that men with deep-seated homosexual tendencies—and, significantly, men who supported the “so-called ‘gay culture’”—shouldn’t be admitted to seminary or receive Holy Orders.

It was his anger at the “institutional Church” over that document that prompted him to “come out” to his bishop for the first time. But it wasn’t until years later, in 2014, during a leave of absence granted by Bishop Choby, that Wolf “came out” to family, friends, fellow clergy, and parish staff, even writing his parish council a letter in July 2015 that announced he was “gay.”

According to Wolf, after his eventual decision to publicly “come out,” Bishop Choby told him he personally “could peaceably say to anyone, ‘Yes, I know that Fr. Wolf is gay, and that he is celibate. He is a good priest. Anything else?’”

But Wolf’s celibacy isn’t the problem. His undermining of Church teaching and resulting harm to souls is.

[O]ne of the more helpful writings in my personal healing has been from James Alison who proposes that the world is undergoing a discovery that there is a regularly occurring non-pathological minority variant in the human condition … which we currently call “being gay.”

Everyone got that? That’s Wolf’s bedrock of truth upon which he builds a flimsy house of cards that is now deeply and adversely affecting his own parish. Wolf also adds: “One’s sexual and gender identity is a sacred discovery revealed by our Maker, sometimes in a moment of clarity and sometimes quite gradually.”