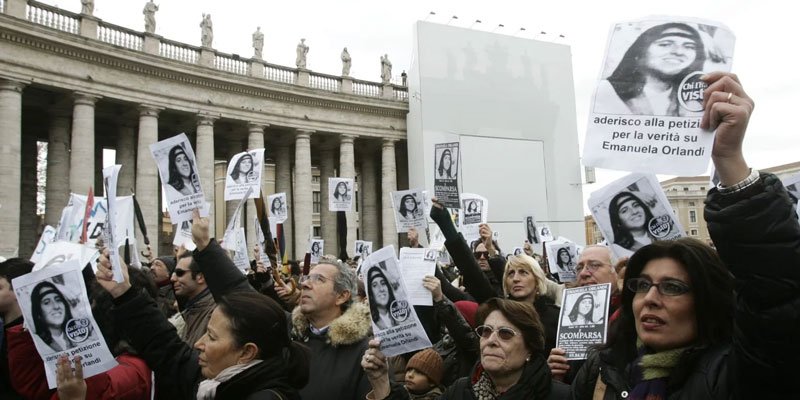 The family of Emanuela Orlandi, a teen with ties to the Holy See who went missing 35 years ago, just got a cryptic message that their daughter may be buried inside Vatican City.

Pietro Orlandi is 100 percent sure that the Vatican knows a lot more than it says about what happened to his sister when she disappeared more than 35 years ago. And he is sure that the Roman Catholic clergy want to keep that secret, like so many others.

Emanuela Orlandi, who lived inside Vatican City where her father worked for the Vatican Bank, disappeared June 22, 1983. She was last seen in front of Sant’ Apollinare, an Opus Dei church near Piazza Navona in Rome. She had just finished a flute lesson. She was 15 years old.

Now the Orlandi family has received an anonymous tip that could start the mystery unraveling, and it comes at a time when extraordinary allegations about sexual slavery elsewhere within the church have been acknowledged as true, including by Pope Francis.

The tip about Emanuela came in the form of a brief letter sent to the Orlandi lawyer from inside the Vatican, accompanied by a photograph. It showed a stone angel at an unmarked tomb in the Teutonic Cemetery, which lies inside the Vatican walls. The cemetery is not accessible to the general public, but someone keeps a red votive candle lit at this tomb—only at this tomb— and there are always fresh flowers in a vase. The only thing engraved on it is a marble scroll the angel holds: Requiescat in Pace, it says. Rest in Peace.

“I wish so much that this whole story was a hoax. I really wish Emanuela was not here,” Orlandi told The Daily Beast. He has spent the last 35 years searching every false lead that might lead to the truth about what happened to his sister, and he is weary. “I do it for my mother, for my sisters, for my father who is dead. I do it for me, of course. Even if it means I am going to be met with the pain, with the doors slammed in the face, with disappointments.”

Orlandi’s family now wants the pope to grant permission to exhume whomever or whatever lies in the mysteriously tended tomb, which is reported to have been opened “at least once” in the last few decades. According to Italy’s Corriere Della Sera newspaper, cement work shows it has been re-sealed.

The Vatican spokesman said in a statement that the Holy See is “studying” the matter and will soon decide whether to honor the request.

Read more at the Daily Beast