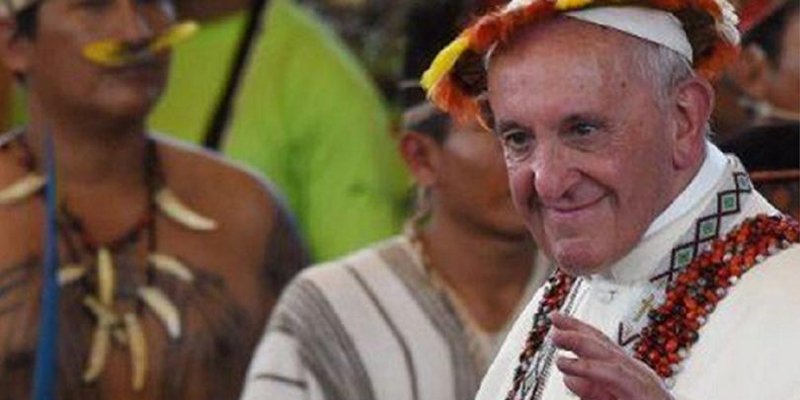 The first reactions in response to the Instrumentum Laboris for the Amazon Synod were focused on its opening to married priests and the insertion of women into the sacramental orders of the Church. But the Instrumentum Laboris is something more: it’s a manifesto for liberation eco-theology which proposes a pantheist, egalitarian “cosmo-vision” , unacceptable for a Catholic. The gates of the Magisterim, as José Antonio Ureta, rightly highlighted, are being thrown wide open “to Indian Theology and Ecotheology, two Latin American derivatives of Liberation Theology. After the collapse of the USSR and the failure of “real socialism”, the advocates of Liberation Theology (LT), on the Marxist style, attributed the historic role of revolutionary force to indigenous peoples and to nature”.*

In the document, published by the Holy See on June 17, the Amazon “bursts” into the life of the Church like a “new entity” (n.2). But what is the Amazon? It is not only a physical place and a “complex biosphere” (n.10) but also “a reality full of life and wisdom” (n.5), which ascends to a conceptual paradigm and calls us to a “pastoral, ecological and synodal” conversion (n.5). In order to carry out its prophetic role, the Church must heed “the Amazon peoples” (n.7). These people are able to live in “intercommunication” with the entire cosmos (n.12), but their rights are threatened by the economic interests of the multinationals, which, as the natives of Guaviare (Colombia) say “have slashed the veins of our Mother Earth” (n.17).

The Church listens to the “cry, of both the people and the earth (n.18), because in the Amazon “the land is a theological place by which the faith is lived. It is also a unique source of God’s revelation” (n.19). So then, a third source of Revelation has been added to Holy Scripture and Tradition: the Amazon, the land where “everything is connected” (n.20), everything is “constitutively related, forming a vital whole” (n.21). In the Amazon, the ideal of Communism is fulfilled, given that, in tribal collectivism, “everything is shared and private spaces – typical of modernity – are minimal.”

The native peoples have been liberated from monotheism and have restored animism and polytheism. Indeed, as is written in no. 25: “the life of the Amazonian community has not yet been influenced by Western civilization. This is reflected in the beliefs and rites regarding the action of spirits and the divinity – named in many different ways – with and in the territory, with and in relation to nature. This cosmo-vision is picked up in Francis’s ‘mantra’: “everything is connected” (LS 16, 91, 117, 138, 240)».

TAKE ACTION: Contact your bishop and ask him to speak-out.