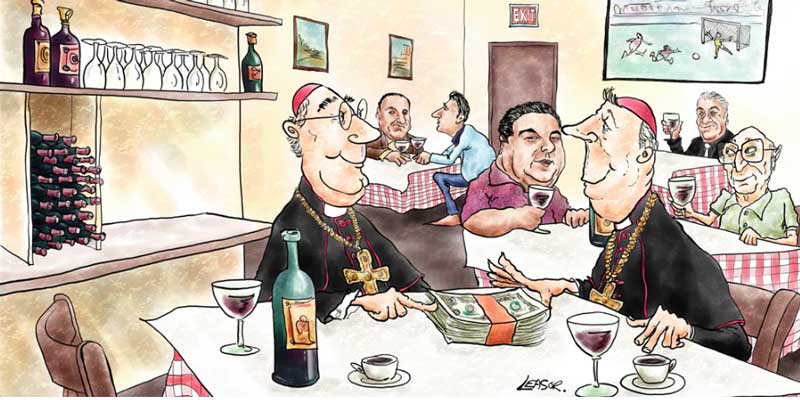 A new report gives a disturbing insight into the way that money circulates among Church leaders. How long can it continue?

“The Devil always enters by way of the pocket.” It’s a phrase that Pope Francis often repeats. He has it on no lesser authority than that of St Paul the Apostle, who wrote: “For the desire of money is the root of all evils; which some coveting have erred from the faith, and have entangled themselves in many sorrows” (1 Timothy 6:10).

If the allegations against Michael J Bransfield, the former Bishop of Wheeling-Charleston, as well as those regarding the scores of clerics who benefitted from his largesse, are correct, it would suggest that too many in the hierarchical leadership of the Church do not believe St Paul in any meaningful sense of the word, or else have become so used to an unseemly cultural reality that their good sense has been almost totally eclipsed.

First reported by the Washington Post last week, the story of Bishop Bransfield is one in which a man supposed to be a shepherd used the special circumstances of the diocese he led – specifically an enormous endowment grown out of a bequest of oil-rich land holdings in Texas nearly a century ago – to lead a lavish lifestyle.

An investigation concluded that he engaged “in a pattern of excessive and inappropriate spending” on such items “as personal travel, dining, liquor, gifts and luxury items”. Fresh flowers were reportedly delivered daily to his chancery office, at a total cost of $182,000 (£143,000) over 13 years. Investigators also accused him of sexual harassment.

(Bishop Bransfield has denied the allegations. He told the Washington Post last week that “none of it is true” and claimed that “Everybody’s trying to destroy my reputation”.)

The Washington Post reported that Archbishop William E Lori of Baltimore, the man the Vatican asked to lead the preliminary investigation into Bransfield, was one of the dozens of prelates to whom he would occasionally send monetary gifts. Bransfield would write cheques to clerics drawn on his personal account, and then have himself reimbursed out of diocesan coffers.

Archbishop Lori did not disclose these gifts to the Vatican at the time he agreed to lead the investigation. When the news was about to become public, he made restitution to the Diocese of Wheeling-Charleston of the $7,500 (£5,900) in gifts he received. He also professed ignorance of Bransfield’s modus operandi and insisted that he had always acted in good faith.