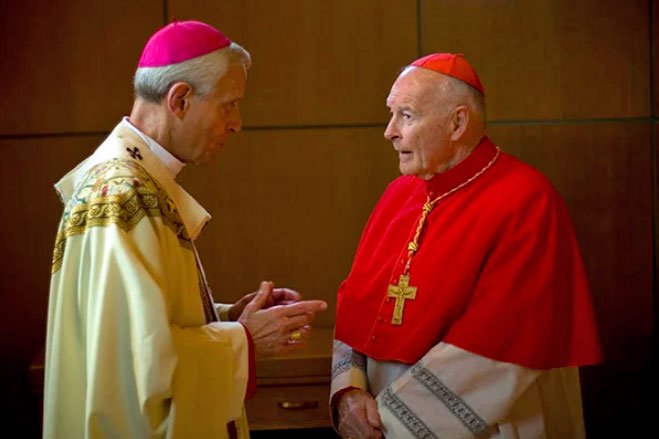 Newly released letters vindicate Abp. Carlo Maria Viganò, proving that Pope Benedict imposed restrictions on Theodore McCarrick and that Cdl. Donald Wuerl knew of these restrictions, in spite of his claims to the contrary. They also prove that McCarrick ignored those restrictions.

Correspondence published Tuesday by Msgr. Anthony J. Figueiredo, former personal secretary to McCarrick when he served as head of the archdiocese of Newark, New Jersey, detail the extent of the penalties imposed by Benedict.

My decision follows attempts since September 2018 to share and discuss these with the Holy See and other Church leaders.

“After long consideration, I have made the decision to place in the public domain some of the correspondence and other information related to McCarrick that I possess in my many years of service to him,” Figueiredo wrote. “My decision follows attempts since September 2018 to share and discuss these with the Holy See and other Church leaders.”

Figueiredo clarifies that the “documents used in this report have been vetted for their authenticity by lawyers and journalists.”

An Aug. 25, 2008 letter from McCarrick to then-papal nuncio Abp. Pietro Sambi, reveal McCarrick’s acknowledgment of the estrictions imposed on him:

However, having studied the letter of Cardinal Re and having shared it with my Archbishop, I pledge again that I shall always try to be a good servant of the Church even if I do not understand its desires in my life. Of course, I am ready to accept the Holy Father’s will in my regard.

I could find a place to live in one of the parishes of the Archdiocese of Washington. The Archbishop is willing to arrange for that in any area that the Holy See would desire.

In summary, in the future I will make no commitments to accept any public appearances or talks without the express permission of the Apostolic Nuncio or the Holy See itself.

At the time, McCarrick’s archbishop was Wuerl; thus his comment that he had “shared it [the letter] with my Archbishop” proves Wuerl was made aware of the restrictions imposed on McCarrick.

This contradicts Wuerl’s public statements from last year, in which Washington, D.C. archdiocesan spokesman Ed McFadden told Catholic News Agency, “Cardinal Wuerl did not receive documentation or information from the Holy See specific to Cardinal McCarrick’s behavior or any of the prohibitions on his life and ministry suggested by Archbishop Vigano.”

Vigano himself called out Wuerl in his August 2018 testimony, accusing him of lying, saying that his “recent statements that he knew nothing about it, even though at first he cunningly referred to compensation for the two victims, are absolutely laughable. The Cardinal lies shamelessly.”