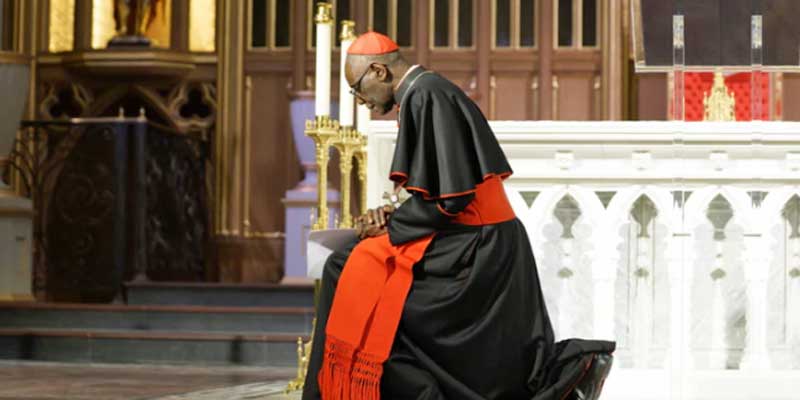 Cardinal Robert Sarah is publishing the third of his book-length interviews with Nicolas Diat: The Day is Far Spent. An unflinching diagnosis, but one full of hope in the midst of the spiritual and moral crisis of the West.

1) In the first part of your book, you describe “a spiritual and religious collapse.” How does this collapse manifest itself? Does it only affect the West or are other regions of the world, such as Africa, also affected by it?

The spiritual crisis involves the entire world. But its source is in Europe. People in the West are guilty of rejecting God. They have not only rejected God. Friedrich Nietzsche, who may be considered the spokesman of the West, has claimed: “God is dead! God remains dead! And we have killed him…” We have murdered God. In view of God’s death among men, Nietzsche would replace him with a prophetic “Superman.”

The spiritual collapse thus has a very Western character. In particular, I would like to emphasize the rejection of fatherhood. Our contemporaries are convinced that, in order to be free, one must not depend on anybody. There is a tragic error in this. Western people are convinced that receiving is contrary to the dignity of human persons. But civilized man is fundamentally an heir, he receives a history, a culture, a language, a name, a family. This is what distinguishes him from the barbarian. To refuse to be inscribed within a network of dependence, heritage, and filiation condemns us to go back naked into the jungle of a competitive economy left to its own devices. Because he refuses to acknowledge himself as an heir, man is condemned to the hell of liberal globalization in which individual interests confront one another without any law to govern them besides profit at any price.

In this book, however, I want to suggest to Western people that the real cause of this refusal to claim their inheritance and this refusal of fatherhood is the rejection of God. From Him we receive our nature as man and woman. This is intolerable to modern minds. Gender ideology is a Luciferian refusal to receive a sexual nature from God. Thus some rebel against God and pointlessly mutilate themselves in order to change their sex. But in reality they do not fundamentally change anything of their structure as man or woman. The West refuses to receive, and will accept only what it constructs for itself. Transhumanism is the ultimate avatar of this movement. Because it is a gift from God, human nature itself becomes unbearable for western man.

This revolt is spiritual at root. It is the revolt of Satan against the gift of grace. Fundamentally, I believe that Western man refuses to be saved by God’s mercy. He refuses to receive salvation, wanting to build it for himself. The “fundamental values” promoted by the UN are based on a rejection of God that I compare with the rich young man in the Gospel. God has looked upon the West and has loved it because it has done wonderful things. He invited it to go further, but the West turned back. It preferred the kind of riches that it owed only to itself.

Africa and Asia are not yet entirely contaminated by gender ideology, transhumanism, or the hatred of fatherhood. But the Western powers’ neo-colonialist spirit and will to dominate pressures countries to adopt these deadly ideologies.

2) You write that “Christ never promised his faithful that they would be in the majority” (pg. 34), and you go on: “Despite the missionaries’ greatest efforts, the Church has never dominated the world. The Church’s mission is a mission of love, and love does not dominate” (pg. 35). Earlier, you wrote that “it is the ‘small remnant’ that has saved the faith.” If you will pardon a bold question: What is the problem exactly, seeing that this “small remnant” does in fact exist currently and manages to survive even in a world hostile to the faith?

Christians must be missionaries. They cannot keep the treasure of the Faith for themselves. Mission and evangelization remain an urgent spiritual task. And as St. Paul says, every Christian should be able to say “If I proclaim the gospel, this gives me no ground for boasting, for an obligation is laid on me, and woe to me if I do not proclaim the gospel!” (1 Cor 9:16). Further, “God desires everyone to be saved and to come to the knowledge of the truth” (1 Tim 2:4). How can we do nothing when so many souls do not know the only truth that sets us free: Jesus Christ? The prevailing relativism considers religious pluralism to be a good in itself. No! The plenitude of revealed truth that the Catholic Church has received must be transmitted, proclaimed, and preached.

The goal of evangelization is not world domination, but the service of God. Don’t forget that Christ’s victory over the world is…the Cross! It is not our intention to take over the power of the world. Evangelization is done through the Cross.

The martyrs are the first missionaries. Before the eyes of men, their life is a failure. The goal of evangelization is not to “keep count” like social media networks that want to “make a buzz.” Our goal is not to be popular in the media. We want that each and every soul be saved by Christ. Evangelization is not a question of success. It is a profoundly interior and supernatural reality.