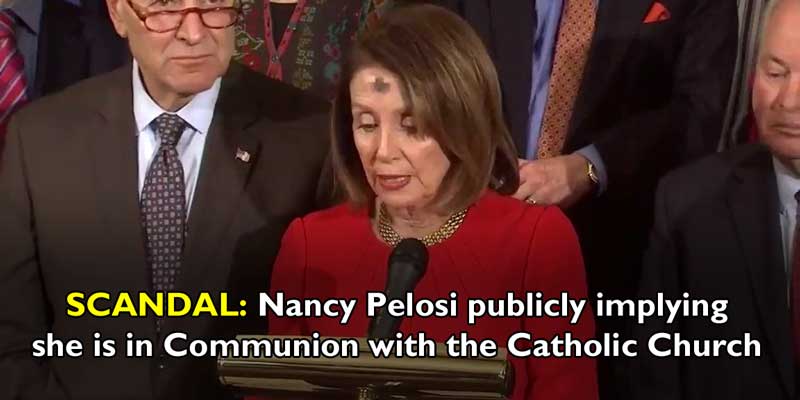 House Speaker Nancy Pelosi (D.-Calif.) said at her press briefing on Thursday that she wants to “salute” the Green New Deal and went on to explain that “as a Catholic” she believes—“as do many of our Evangelical friends”—that we have a responsibility to be good stewards of creation.

“And it is a moral issue,” Pelosi said. “We all have a responsibility to pass this planet on to future generations in a responsible way.

“I myself, as a Catholic, believe, as do many of our evangelical friends and the rest who share our belief, that this is God’s creation and that we have a moral responsibility to be good stewards of it,” she said.

“So, this is a very high priority,” Pelosi said.

How can this woman be allowed to continue to publicly cite her ‘Catholic’ faith when she supports positions diametrically opposed to Catholic teaching, like abortion and same-sex ‘marriage’?

While Archbishop Salvatore Cordileone has already instructed Pelosi she should not receive Holy Communion, this is not enough.  Pelosi must be excommunicated to stop the scandal of her citing her Catholic faith to advance her political agenda.

TAKE ACTION: Contact Archbishop Cordileone at 415.614.5500 and ask him to excommunicate Nancy Pelosi.