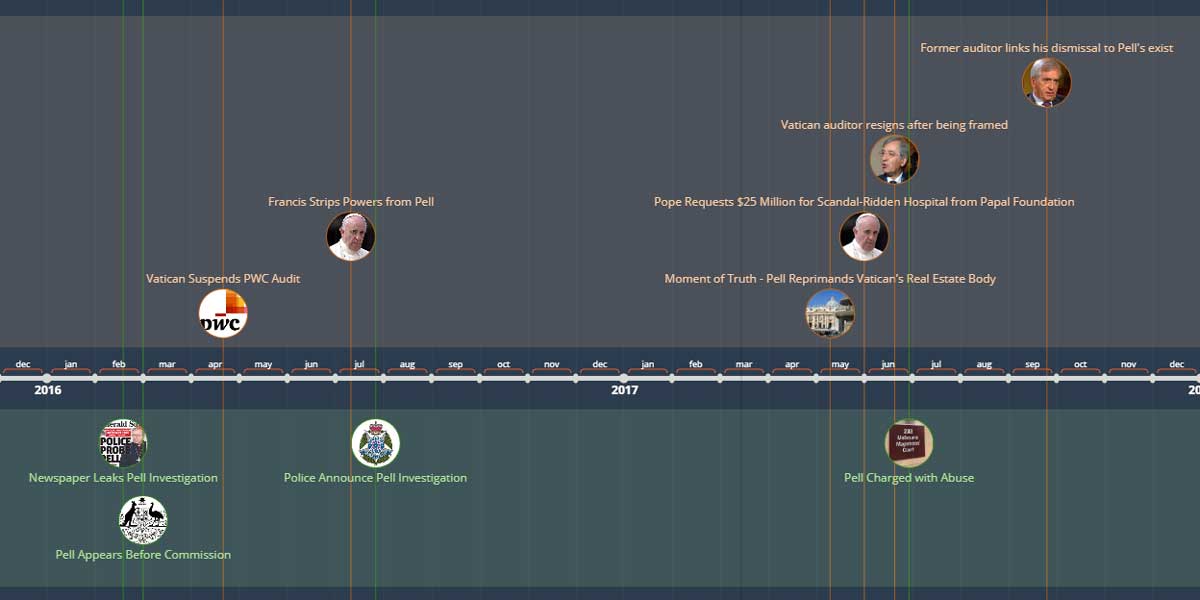 TIMELINE INSTRUCTIONS: Click, hold and drag timeline to adjust view left or right. Click on timeline item to read details.  Zoom in or out using control at top right.

A chronological list of key events in the life of the Australian cardinal, including details of his financial reforms as well as abuse allegations, charges and eventual conviction from National Catholic Register.

1941 George Pell is born in the Victorian town of Ballarat to an Irish Catholic mother and a non-practising Anglican father.

1960 Pell begins studying for the priesthood at Corpus Christi College in Werribee.

1966 Pell is ordained by Cardinal Grégoire-Pierre Agagianian, an Armenian Catholic and a leading figure on communism and the Soviet Union.

1972 Father Pell returns to Ballarat as a parish priest.

1973 He lives with Gerard Ridsdale who was later convicted for sexual abuse in the 1960s-1980s. Pell has maintained he never knew of the abuse, which was a focus of questioning by Australia’s royal commission in 2016.

1977 Father Pell is part of a committee that sends Ridsdale to his next parish of Edenhope. His bishop, Ronald Mulkearns, knew about complaints against Ridsdale but Pell told a 2016 royal commission that the bishop deliberately withheld details from him and other consultors.

1990 John Paul II appoints him a member of the Congregation for the Doctrine of the Faith, a position he holds until 2000.

1996 John Paul II appoints Pell archbishop of Melbourne where he pioneers the Melbourne Response, which offers support and counselling to victims of sexual abuse but was criticized for placing limits on compensation payments.

2002 He temporarily stands aside while a Church investigation looks into an allegation that he sexually abused a 12-year-old altar boy in 1961 while he was a seminarian. Pell denies the allegations which are not proven.

March 2013 Victoria police set up “Operation Tethering,” a probe that targeted Pell before any formal allegations of historical sexual offences were made. The investigation turned into an “operation” in April 2015 based on allegations of “inappropriate behavior” by Pell, but no accusations of criminal conduct.

February 2014 Pope Francis appoints Cardinal Pell prefect of the Secretariat for the Economy, making him head of Vatican finances and the third most senior figure in the Church.

March 2014 Pell appears before the royal commission in Sydney, says he should have exercised greater oversight over fighting a legal claim by abuse victim, John Ellis. The litigation “was hard fought, perhaps too well fought by our legal representatives,” he said.

August 2014 Pell appears before the royal commission in Melbourne, and defends his Melbourne Response program for sex abuse victims.

December 2014 Cardinal Pell says his department found millions of euros in Vatican dicasteries “tucked away,” off balance sheets. The amount consisted of 94 million euros in the Secretariat for State, later followed by the discovery of nearly 1 billion euros in various other dicasteries.

June 2015 The royal commission announces Cardinal Pell is to appear in a second set of hearings in the Ballarat archdiocese. The cardinal says he is prepared to return to Australia to give evidence but health reasons later prevent him from doing so, and so he gives evidence via video link from Rome.

February 2016 The cardinal strongly denies a newspaper allegation he is being investigated for “multiple offences” and calls for an inquiry into Victorian police, believing the allegations were leaked to damage him ahead of his third appearance before the royal commission.

March 2016 During that appearance, Cardinal Pell repeats that he did not have any knowledge of Ridsdale’s actions when he was a priest in Ballarat in the 1970s.

April 2016 The Vatican Secretariat of State announces suspension of first external audit of the Vatican without consulting Cardinal Pell. “They’re afraid of the audit uncovering information they don’t want uncovered and are worried about losing sovereign control over Vatican finances,” a source tells the Register. “What they want is to get rid of Cardinal Pell.”

July 2016 Pope Francis issues a motu proprio, returning administration of the Holy See’s assets to APSA, as part of a process of stripping powers that had been given to the Secretariat for the Economy when it was created in 2014.

July 2016 Victoria police announce allegation against Cardinal Pell that he exposed himself to a group of young boys at a surf club in the late 1980s.

October 2016 Australian detectives fly to Rome to interview Pell about child sexual abuse allegations, including abuse of two choristers in Melbourne cathedral — an allegation a jury later found him guilty of committing. During the interview (see video), Pell dismisses the allegations as “a load of absolute and disgraceful rubbish.” He tells detectives that if they lay charges against him it will damage the Church.

February 2017 Detectives send an updated brief of evidence to the office of public prosecutions.

May 10, 2017 APSA unilaterally tells Vatican departments to supply information to an outside auditor, a move rejected by Cardinal Pell and Vatican auditor general Libero Milone. In a letter to the Pope obtained by the Register, Cardinal Pell says he believes “serious irregularities” at APSA indicate the Vatican could be approaching the “moment of truth” in the economic reforms.

June 20, 2017 Libero Milone unexpectedly resigns. He later says he was “threatened with arrest,” and that the head of the Gendarmerie (Vatican police) intimidated him into resigning because his investigations were uncovering corruption in the Vatican. A year later, the Vatican withdrew charges against Milone; it has yet to reinstate him or offer compensation.

June 29, 2017 Cardinal Pell is charged with multiple sexual offences and is ordered to appear at Melbourne magistrates court on July 26. He vigorously protests his innocence, and volunteers to fly back to Australia to clear his name even though he could invoke diplomatic immunity.

September 2017 Milone links his dismissal to the exit of Cardinal Pell, implying the two may be more than just coincidence during an overhaul of Vatican finances.

September 20, 2018 A mistrial is declared after jurors were unable to reach a majority verdict. Some reports say the verdict was 10-2 in Pell’s favor, but this has not been fully proven.

December 6, 2018 Jury retires to deliberate after a retrial.

December 11, 2018 The jury returns a unanimous verdict of guilty on all five charges of abusing the boys in St. Patrick’s Cathedral after less than four days of deliberation. Suppression order remains in place until second trial is over. Pell’s defence lawyer says he will “absolutely” appeal against the verdict. Pell is granted bail until February 2, 2019, in order to undergo knee reconstruction surgery in Sydney.

December 13, 2018 Pope Francis removes Cardinal Pell and two other cardinals from his Council of Cardinals advising him on Church reform. Pell remains prefect of the Secretariat for the Economy.

February 24, Cardinal Pell’s five-year mandate as prefect of the Secretariat for the Economy expires.

February 26, 2019: Prosecutors announce they have dropped the second trial owing to a lack of evidence, and because one of Pell’s key accusers died in January 2018. As there is no longer a risk of prejudicing a jury, Kidd lifts the suppression order on the first trial.

March 13, 2019: Kidd sentences Cardinal Pell to six years in prison, with a non-parole period of three years and eight months. The appeal hearing will take place in June.