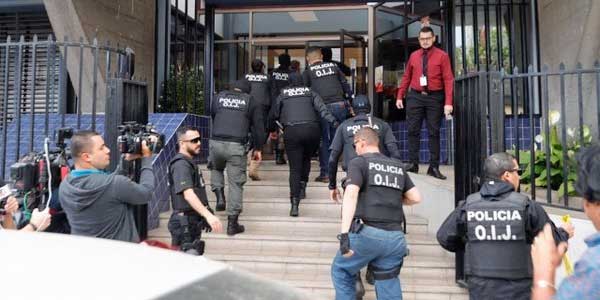 This morning, agents of the Judicial Investigation Organization (OIJ) raided the facilities of the Ecclesiastical Court and the metropolitan curia in San José, as part of the investigations that are being carried out against the ex-priest Mauricio Víquez Lizano, 54 years old, and the priest Manuel Antonio Guevara Fonseca, 52.

Directed by the Office of the Second Judicial Circuit of San José and the Deputy of Gender, the raid began at 8:00 a.m. and is aimed at the search, search and seizure of documents of the facilities, located in the building of the Episcopal Conference, in the Mexico neighborhood. The Conference is the highest authority of the Catholic Church.

“Three prosecutors participate in the operational actions and the objective is to gather relevant documentary evidence to be provided to the cases, which are in the preparatory phase of the investigation,” the Public Prosecutor said in a statement.

All the collected evidence will be included in the files 18-000854-994-PE, in which Víquez is investigated for rape and others, and in 19-000569-0175-PE, in which Guevara appears as a suspect of an abuse sexual assault against a minor.

According to the judicial authorities, when Víquez exercised the priesthood in the church of Patarrá de Desamparados, he raped a person with surnames Alvarado.

The facts would have occurred in September 2003, when the victim was 11 years old. Currently the boy is 27.

It was learned that in the proceedings at least 20 complaints were filed against other priests; However, these data have not yet transcended.

While the raids were being carried out, the Metropolitan Cathedral was held a mass and outside, some people shouted “come out corrupt, face … go out”.

Jeison Granados, spokesman for the metropolitan curia, assured the media that the Catholic Church is in the best position to collaborate with the authorities.

“We are in the best disposition to collaborate with the authorities, so we give them what they require,” said Granados.

He added that in the Ecclesiastical Court are the complaints raised by the alleged victims and that “the objective of the Church is to clarify the situation.”