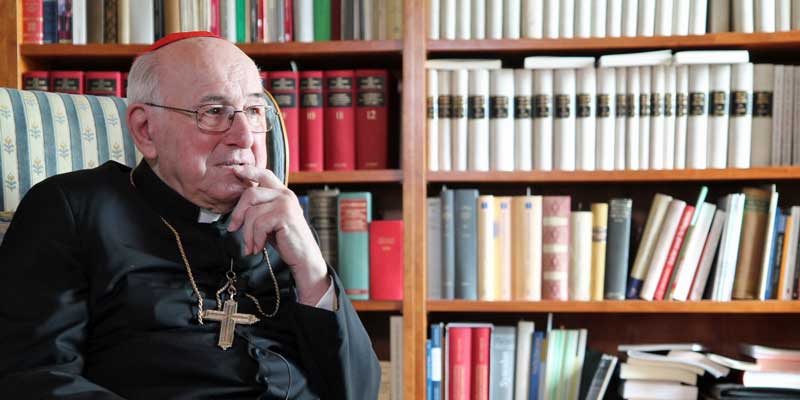 On the eve of the Vatican meeting on child protection in the Church, Cardinal Walter Brandmüller and Cardinal Raymond Burke sent an open letter to the bishops attending the meeting to end their silence on moral corruption in the Church and return to upholding the divine and natural law.

The two cardinals, who also signed the 2016 dubia seeking clarification from Pope Francis on his moral teaching, argued that the abuse crisis is only part of a wider and much deeper problem that owes itself to a society openly calling into question an absolute moral law, and Church leaders who have “gone away from the truth of the Gospel.”

“A decisive act now is urgent and necessary,” the cardinals wrote, and called for an end to the “plague of the homosexual agenda” in the Church, organized networks of protection, and a “climate of complicity and a conspiracy of silence.”

In a Feb. 25 interview with the Register, Cardinal Brandmüller, who is president emeritus of the Pontifical Committee for Historical Sciences, spoke of his disappointment with the meeting, especially that it ignored many of the concerns raised in their letter. Nevertheless, he said, “we live in hope and trust in divine Providence.”

Your Eminence, what is your reaction to the meeting? Some complained that the root causes weren’t properly discussed, the concerns in your letter such as the crisis of faith and doctrinal laxity.

We are very disappointed.

Do you think the homosexual issue was deliberately avoided?

Absolutely, and this is a silence which cries out to be broken, because therein lies the real problem.

Do you think the summit addressed any of your concerns, a crisis of faith and doctrinal problems?

We’ve said all that needs to be said. It all depends on what will be done now, but the silence about homosexuality is a real problem.  We have written our letter as observers from the outside; neither Cardinal Burke nor myself are involved.

Why do you think the crisis of faith, upholding moral doctrine, reforming the appointment of bishops and mechanisms that allowed McCarrick to happen were not discussed?

Discussing the problem of homosexuality would have become dangerous for them, because it’s evident there is a network of homosexuals within the Vatican. That’s the problem, there’s no question.