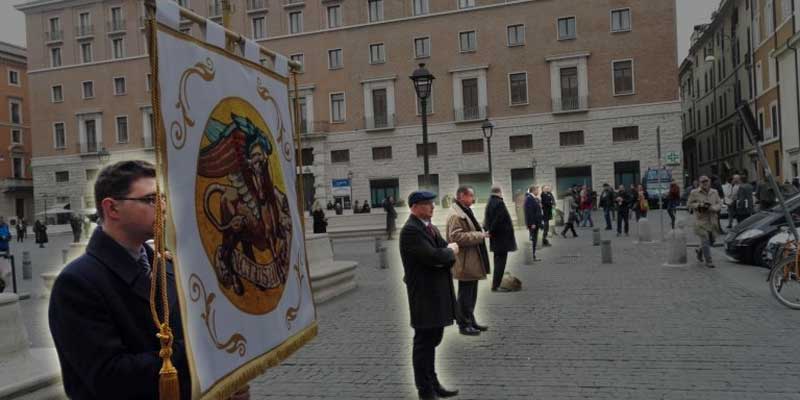 One of the main reasons for the sufferings was the vision of infidelity, not only of the chosen people, but of all those who in future centuries would lead the Church founded by Our Lord on Calvary.

Quae utilitas in sanguine meo? ( Ps 29,10) This atrocious question penetrated His heart, and must penetrate ours, like a sharp sword. God replied that every infidelity, every apostasy, every sacrilege that would go down the centuries, was allowed to shine with greater splendor the purity of the doctrine and life of those who over the centuries would have collected and raised the bloody banner of the Cross, opposing it to that of the followers of Lucifer.

Today, as always throughout history, we live the struggle between the two flags: that of the friends of the Cross and that of His enemies, who are not only the persecutors, but also the unfaithful apostles. The summit that takes place in these days in the Vatican, appears to many as a “conciliabolo” that has as a program to divert the attention of Catholics from the terrible crisis, due to the loss of faith and morals, to focus on a problem , such as abuses against minors, which is a limited symptom of a much larger and deeper evil. But a word of consolation to Our Lord for His pains certainly came from three events that took place on February 19th.

A coalition of lay people, Acies Ordinata , has deployed as an army that takes the field, a hundred lay Catholics, from all over the world, who have demonstrated, standing and in silence, to ” break the wall of silence of the ecclesiastical authorities “.

The event took place in Rome, in the central square of San Silvestro, which takes its name from the Church of San Silvestro in Capite, where the relic of the head of Saint John the Baptist is kept, the precursor of the Messiah who did not stop in front of Herod and he faced martyrdom for having broken the silence on his conjugal infidelity. In this church, at the end of the event, the demonstrators gathered in prayer reciting the Holy Rosary.

TAKE ACTION: Are YOU willing to stand-up and fight for our faith? Then please register now.