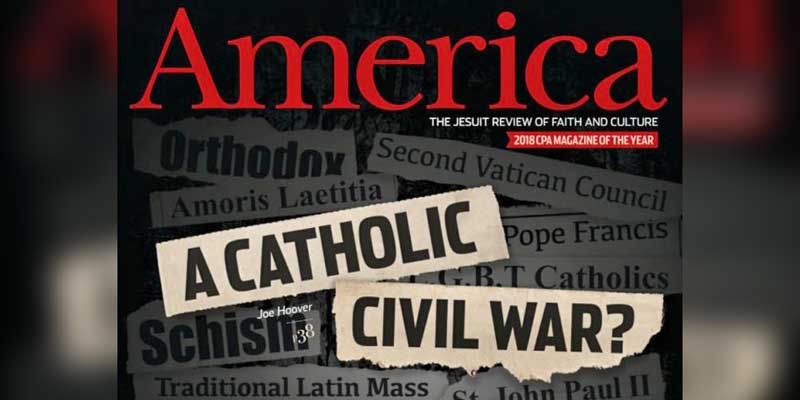 The Jesuit-run publication America has carried an article by a professor-psychologist who claims that homosexuality is not the “root cause” of clerical sexual abuse. The photo accompanying the article contained an angel with a rainbow in the background.

Dr. Thomas G. Plante, a professor of psychology at the Jesuit Santa Clara University and an adjunct clinical professor of psychiatry at the Stanford University School of Medicine, had his article published on October 22 in which he states that sexual orientation is “simply” not a factor in the clerical sex-abuse of minors.

“Many people believe that homosexuality is the root cause of sexual abuse by clergy in the Catholic Church since about 80 percent of the known victims have been male,” he wrote.

“This has led some church leaders to suggest that banning homosexual men from the priesthood could prevent future victimization of children in the church,” he continued. “While it may be understandable that some believe this, it is simply not true,” he averred.

Plante did not appear to understand that men with deep-seated homosexual attractions are already de jure, if obviously not de facto, barred from admission to seminaries. This teaching in the Catholic Church is not new and has been backed by Pope Francis.

Plante said that readers need to be clued in on the “psychopathology of sex offenders and pedophiles” to understand the issue.

It was one of many times in which Plante skirted the fact that the majority of underage victims, at least in the United States, have not been pre-pubescents who are of sexual interest only to pedophiles but adolescent boys.

The Pennsylvania Grand Jury Report clearly identified the 78% of abuse cases it scrutinized as examples of “homosexual predation”. However, despite this finding, Plante wrote that “the research data on the topic makes clear that sexual orientation alone is not a risk factor for pedophilia or for committing sexual crimes against children or teens or anyone. Sexual orientation by itself is irrelevant to child sexual abuse behavior or risks.”

Plante suggested that priests who prey on male children and teens have been “‘situational generalists’, or men who simply abused victims to whom they had access” and “with whom they had the opportunity to develop trust.”