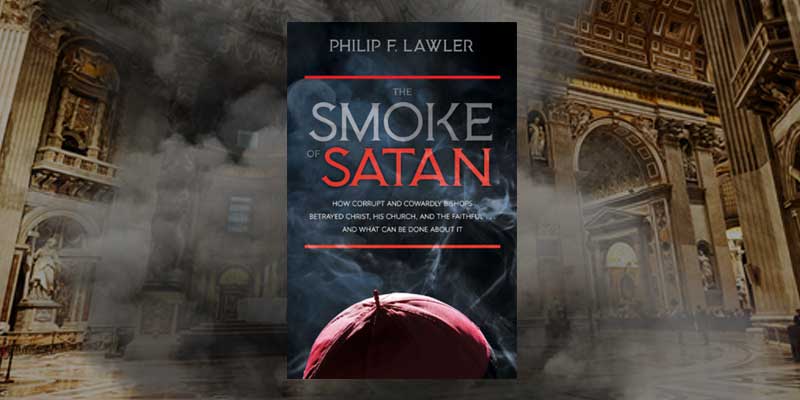 The following, an excerpt from the opening chapter of my new book, The Smoke of Satan, will give readers an idea of what the book holds in store.

In Jerusalem, just outside the walled Old City, stands the church of St. Peter in Gallicantu: St. Peter as the Cock Crows. Catholic churches are regularly dedicated to saints, but only rarely to a particular moment in a saint’s life. Then again, this is no ordinary saint, no ordinary moment.

St. Peter in Gallicantu was built in the 5th century, and rebuilt by Crusaders, on the spot traditionally thought to have been the site where Caiaphas the high priest lived, where Jesus was brought to stand trial. In the courtyard of that house, Peter three times denied that he was a follower of Christ. The Gospel of Luke (22:60-62) recounts the incident:

And immediately, while he was still speaking, the cock crowed. And the Lord turned and looked at Peter. And Peter remember the word of the Lord, how He had said to him, “Before the cock crows today, you will deny me three times.” And he went out and wept bitterly.

In his tears—in his repentance, his willingness to throw himself on Christ’s mercy—Peter found redemption. The first Pope, the acknowledged hero and leader of the early Christian community, was, and knew himself to be, a flawed man.

Nor was Peter the only one of Christ’s followers to desert Him in his time of trial. Of the twelve apostles, the Gospel accounts put only John at the foot of the Cross, keeping vigil with Jesus; the others were not on the scene. Of course John was not alone. With him was Mary, the Mother of Jesus—who, unlike the apostles, was not flawed, never deserted her Son.

When the cock crowed, Peter painfully recognized his sinfulness, his need to acquire holiness: a need that he felt through the day of his martyrdom. For Mary—who, the Church teaches, was born without stain of sin—holiness was and is a constant. In that respect Mary is a model of the Church: always faithful, the spotless Bride of Christ. But Peter and the apostles are also a model of the Church: the hierarchical institution, founded by Christ, guided by the Holy Spirit, yet confided into the care of fallen men.

For Catholics it is always a challenge to keep these two models of the Church in proper perspective. The mystical, Marian model, without the practical guidance of the teaching hierarchy, can veer off into emotionalism and amorphous sentimentality. The Petrine model, stripped of the Marian warmth, can become cold and calculating. In The Beauty of Holiness and the Holiness of Beauty, John Saward writes: “Detached from Mary, the Church is no longer seen as a person, a woman, Christ’s bride, and our mother, but as an organization, a conspiracy of interfering clergymen.” And, one might add, that is what it becomes.

The faithful Catholic should recognize the Christ’s Church in both models, Marian and Petrine. Toward the Marian Church the appropriate attitude is a child-like trust and devotion. Toward the Petrine Church, a mature adult’s confidence.

But what happens when the members of the hierarchy, the leaders of the Petrine Church, lose our confidence?

The history of the Catholic Church is a history marked by success and failure, by sanctity and by sin, by splendor and by corruption. This of course is the history of the visible Church, the hierarchical model; through it all, the Marian Church remains pure and loyal. In good times and bad the sacraments are administered, the Eucharist is celebrated; Christ is with his Church, offering salvation. The invisible work of the Church is always the first priority.

Still it is wrong to dismiss the importance of the hierarchy. Jesus promised that the Holy Spirit would guide the Church always, that despite the manifest weaknesses of her leaders, the Church would prevail over the gates of hell. Popes and bishops have made innumerable errors of judgment over the course of generations, yet the Church still survives, the faith still spreads, while other once-powerful human institutions wither and die. The very fact that the Church has weathered all storms, regardless of the helmsmen’s errors, is in itself evidence of the Spirit’s power. As Hillaire Belloc famously quipped, the “Catholic Church is an institution I am bound to hold divine—but for unbelievers a proof of its divinity might be found in the fact that no merely human institution conducted with such knavish imbecility would have lasted a fortnight.”

Knavish imbecility: those are harsh words. But in 2018 loyal Catholics are using that sort of language to describe the shocking malfeasance of bishops, especially in response to the sex-abuse scandal. Our bishops have betrayed our trust; a deep and pervasive corruption within the hierarchy has been exposed. As a chastened Archbishop Thomas Wenski of Miami observed in a September homily, “Our people still do believe in God; but they don’t believe in us.”

How did our bishops lose the confidence of the faithful, and how can the profound damage to the Church be repaired. This book is written in an effort to answer those questions.

On one level, the first question can be answered quite simply. The bishops lost our confidence because they were—and were shown to be—dishonest. They covered up evidence of sexual abuse, and misled the public with claims that the problem had been resolved. Still worse, their dishonesty continued even after their negligence had been painfully, thoroughly exposed. The same sort of cover-ups that shocked the faithful when they were brought to light in 2002 were unearthed once again in 2018, and this time the faithful, having been assured that the bishops had learned their lessons, were outraged to learn that the deceit had continued.

The habit of dishonesty, I will argue, has been built up in the Catholic hierarchy through years of avoiding conflicts, managing the control of information, and preserving appearances—all motivated by a powerful desire to avoid confronting some fundamental problems. To preserve a façade of unity, bishops have deliberately ignored deep divisions among the faithful: divisions on matters of theological doctrine, moral practice, and canonical discipline. As a result of this negligence, over the years Catholic doctrine has become blurred, moral practice lax, and discipline within the ranks virtually non-existent.

Back in 1972, Pope Paul VI recognized the problems that had sprung up throughout the universal Church in the wake of the Second Vatican Council: “the rising tide of profanity, of desacralization, of secularization that wants to confuse and overwhelm the religious sense in the secret of the heart, in private life, or even in the affirmations of public life.” These ills were not coming exclusively from outside the Church, Pope Paul warned; “through some fissure the smoke of Satan has entered the temple of God.”

Pope Paul’s evocative image of the “smoke of Satan” also suggested that the atmosphere within the Church had been tainted, that vision had been obscured, so that pastors no longer saw issues clearly. And sad to say, although he acknowledged the danger, Pope Paul was unable to avert it. The secular tide kept rising, while the divisions within the Catholic community grew wider.

What were “the fruits of the ecumenical council,” which Pope Paul saw endangered? Some theologians and commentators, on the “progressive” wing of the Church, welcomed Vatican II as a sharp break with Catholic tradition, an invitation to an entirely new approach to the faith. Others, more conservative (and more faithful to the actual documents produced by the Council), saw it as a re-affirmation of traditional teachings, combined with a new pastoral approach. Still others, on the “traditionalist” wing, agreed that the Council had been a radical break, and lamented it.

To avoid bitter clashes, Church leaders did their best to downplay the differences among the faithful, to paper over the divisions. So when theologians at Catholic universities denied what the Popes affirmed, they were rarely corrected. When priests violated liturgical norms, they were rarely rebuked. Mass attendance plummeted, priests and religious by the thousands abandoned their vocations, parochial schools closed, and yet Church leaders avoided expressions of urgency and crisis.

To advance through the ranks of the hierarchy in the late 20th century, clerics were expected to suppress problems rather than to confront them, to soothe the faithful rather than to rouse them, to conceal problems rather than admit them. In that atmosphere, when bishops learned that priests had molested young men, they did their best to “manage” the issue, to keep things running smoothly, above all to avoid calling public attention to the problem. So the abuse continued—just as the theological dissent and the liturgical abuse continued. But finally the cover-up of abuse failed; the truth of the scandal emerged. Now that the evidence that was suppressed for decades has exploded into public view, the bishops’ neglect is unmistakable.

If the fundamental problem facing the Church is dishonesty—a habit of deliberate ambiguity, a failure to grapple with hard truths—then the solution must be a candid, unapologetic proclamation of the truths of the Catholic faith. And if the bishops have lost their instinct for that forthright evangelical approach, then it falls upon lay Catholics—in this era, proclaimed by Vatican II as “the age of the laity”—to demand the truth and reclaim the Catholic tradition.

Purchase the book at Amazon