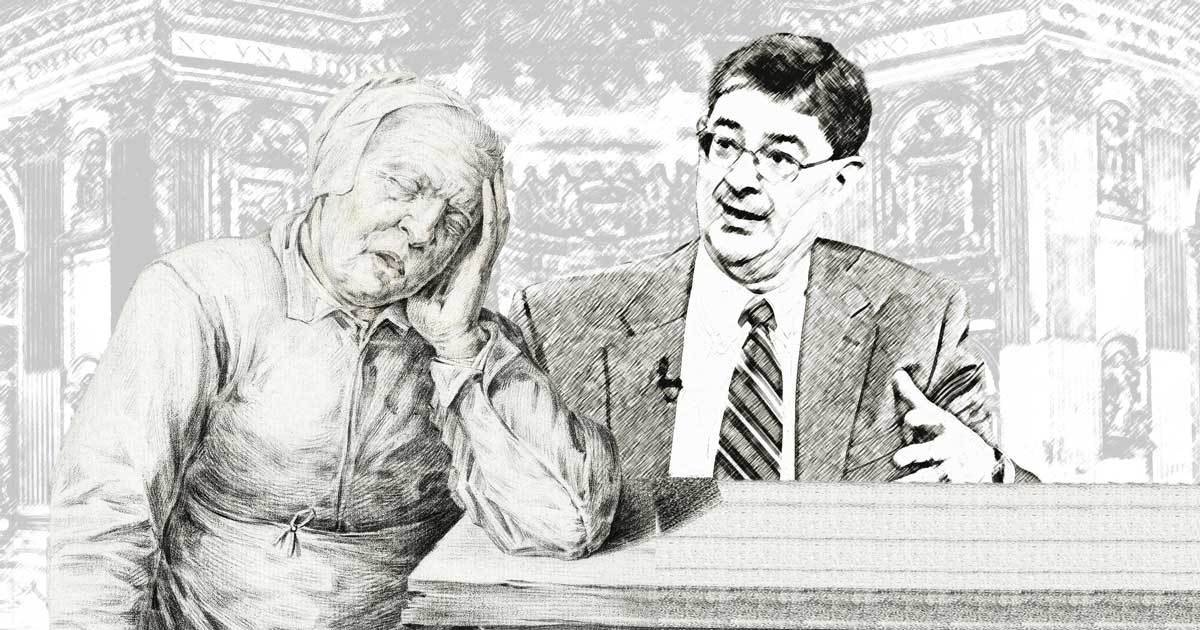 Today, while sipping my espresso, I pictured what I would see if the contemporary Roman Catholic Church, incarnated in a single Grande Dame, were slumped over at the table in front of me, with George Weigel as her companion and chief confidant. There she would sit, her mind and spirit in the most miserable state of befuddlement she had ever experienced in her long and often very troubled life. And there at her elbow would be Mr. Weigel: slapping her on the back, congratulating her on the solidity of her wretched condition, counseling her against temptations to reconnect with an earlier, healthier, existence, and demanding of old friends entering Rocco’s an unambiguous affirmation of the magnificence of her present state of progressive mental, spiritual, and physical collapse.

Now almost everyone dealing with the contemporary Church emphasizes a myriad of problems worldwide, but not Mr. Weigel. The main point of the astonishing article, “Rome’s Reconciliation: Did the Pope Heal or Deepen the Lefebvrist Schism?” (Newsweek, January 26, 2009), inspiring my gloomy vision, is that things are generally peachy-keen with H.M. the Church. With old leftist enemies fading into “insignificance”, the sole real contemporary danger seems to arise from an unfortunate coddling of the Traditionalist Movement. Even so, Mr. Weigel informs us that all will be well so long as “Lefebvrists” undertake to “publicly and unambiguously affirm Vatican II’s teaching on the nature of the Church, on religious freedom, and on the sin of anti-Semitism”. Well said, o creature of a day! But what your summons really means is the need for all Catholics to “publicly and unambiguously affirm George Weigel”.

If I should ever write a book called Begging the Question, Mr. Weigel’s insistence on “unambiguously affirming Vatican II” would provide me all the material I would need to complete the task. For those two little words, “Vatican II” have never referred solely to a particular, self-contained Ecumenical Council in the way that the words “Ephesus” or “Lateran IV” or “Trent” do. “Vatican II” has always meant a great deal more than this from the very first moment that media-savvy theologians hijacked the original conciliar working documents to promote their own vision of progressive Christianity.

Perhaps the best way to summarize the “meat” of the augmented meaning of “Vatican II” is to think of it in terms of the concept of “The Happening”. The Happening was invented by men like Jean-Jacques Rousseau in the late eighteenth century. Post-1789 France put it into practice in the form of what was called the revolutionary journee. The Happening/journee was a public, preferably open-air ceremony, in which the liberated, “natural” man could celebrate the joy of abandoning past authoritative chains, and worship the individual, the communal will, the present, and the future all at once.