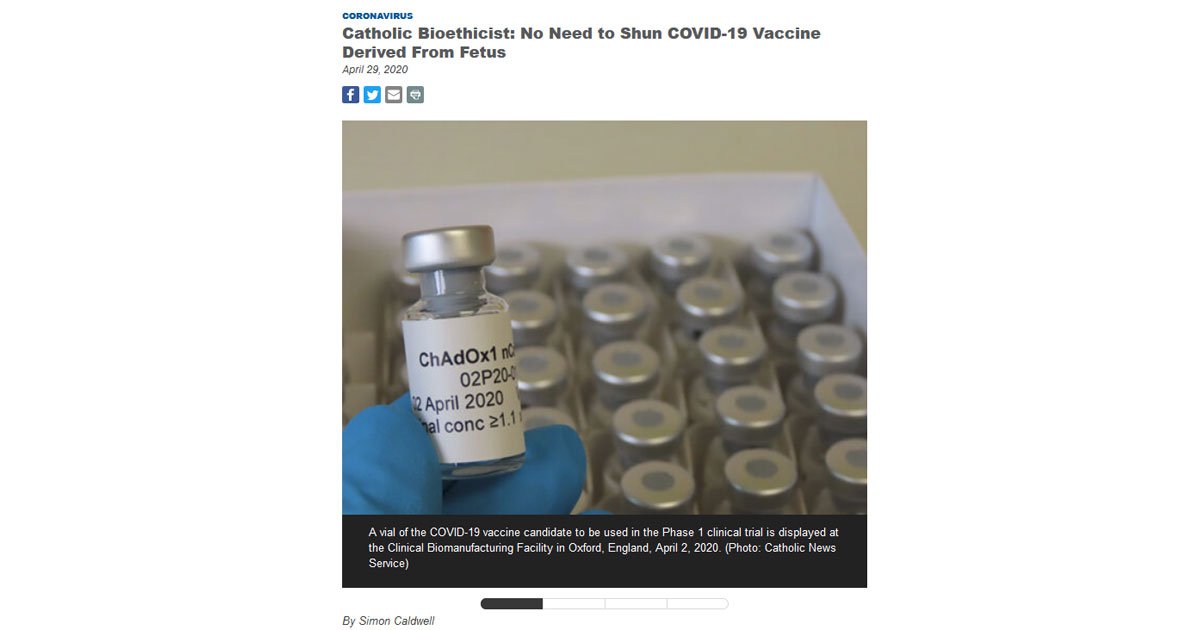 A number of Catholic newspapers have recently published an article from Catholic News Service entitled,”No Need To Shun COVID-19 Vaccine Derived From Fetus.” After public outrage, CNS updated the title to “Catholic Bioethicist: COVID-19 Vaccine Could be Question of Conscience.”

Although the headline changed, the lead story line remains as “There is ‘no absolute duty’ to boycott any COVID-19 vaccine produced with the help of cells derived from aborted fetuses, said a researcher from a Catholic bioethics institute.”

CNS is the official news service of the United States Conference of Catholic Bishops.  This is not the first time that CNS has been the subject of controversy.  In 2016, the editor-in-chief was removed aftering publishing Twitter posts in support of LGBTQ rights.

The vaccine story was quickly republished in a number of Catholic publications, including the Catholic Spirit,the Catholic Register, the Catholic Sentinel, Our Sunday Visitor and a several other diocesan newspapers.

As Phil Lawler points-out in a recent column on the matter, the bioethicist quoted for the column DID NOT approve of using a vaccine using fetal tissue.

In the essay that prompted the report Helen Watt, a senior research fellow at the Anscombe Bioethics Centre, repeats and underlines the Church’s teaching that the use of fetal tissues is morally unacceptable. She insists that responsible Catholics, facing the possibility that CO19 vaccines might be developed by this immoral means, should demand ethical alternatives. She even explains why concerned Catholics should be raising their moral objections now, before the development of vaccines is too far advanced.

So why did the CNS journalist, Simon Caldwell, construct the headline that he did?

And why were so many Catholic publications so quick to republish the controversial column?

One might conclude the journalists involved have agendas that differs from Church teaching.

Publications that call themselves ‘Catholic’ should remove this misleading story from their websites.

Concerned Catholics should contact their bishops to express their concern about this story and request the bishop to issue a formal statement so as to clarify the confusion created by this story.