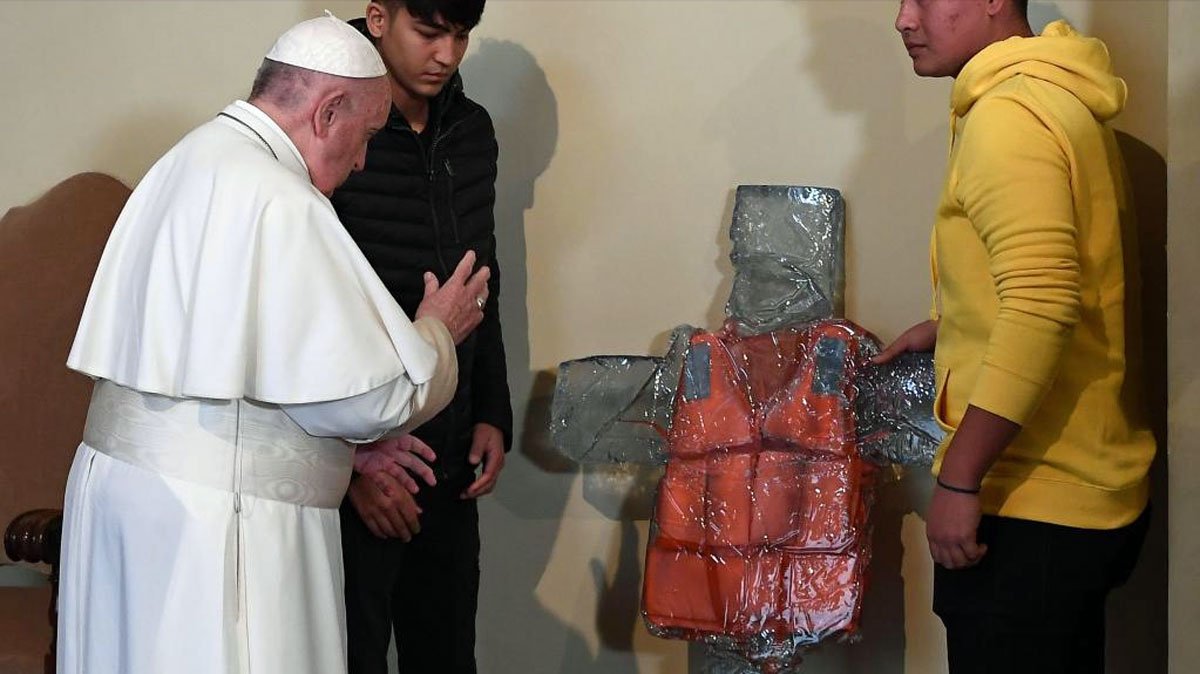 On December 19, 2019, Pope Francis met with 33 asylum-seekers from the Greek island of Lesbos, who were brought to Rome by Cardinal Konrad Krajewski. To mark the occasion, a cross was unveiled in the Belvedere Courtyard in the Vatican to pay tribute to the migrants who have lost their lives in the Mediterranean Sea. The cross is quite unusual, to put it mildly: the body of the cross is transparent, like water, and is encircled by an orange life jacket exactly at the place where Christ would be placed on the cross. The orange life jacket belonged to an unknown migrant who lost his or her life at sea in July 2019.

That nameless migrant, emphasized Pope Francis, was a victim of injustice. “It is injustice that rejects them and causes them to die at sea,” the pontiff said. The cross with the life jacket of the migrant, he stated,

Remind[s] us that we must keep our eyes open …, keep our hearts open …, to remind everyone of the indispensable commitment to save every human life, a moral duty that unites believers and non-believers… How can we remain indifferent to the abuses and violence of which they are innocent victims, leaving them at the mercy of unscrupulous traffickers? How can we go further, like the priest and the Levite of the parable of the Good Samaritan, making ourselves responsible for their death? Our ignorance is a sin.

It might appears as if the cross is “wearing” a migrant’s life jacket. In fact, the migrant’s life jacket occupies the place of Christ Crucified; the jacket is the substitute for Christ on the cross. The unusual cross is controversial, with some Italians wondering if this is Francis’s message for Christmas—making them feel guilty for not helping and caring enough for migrants. Is the unusual cross a tool to guilt the faithful, especially at Christmas?