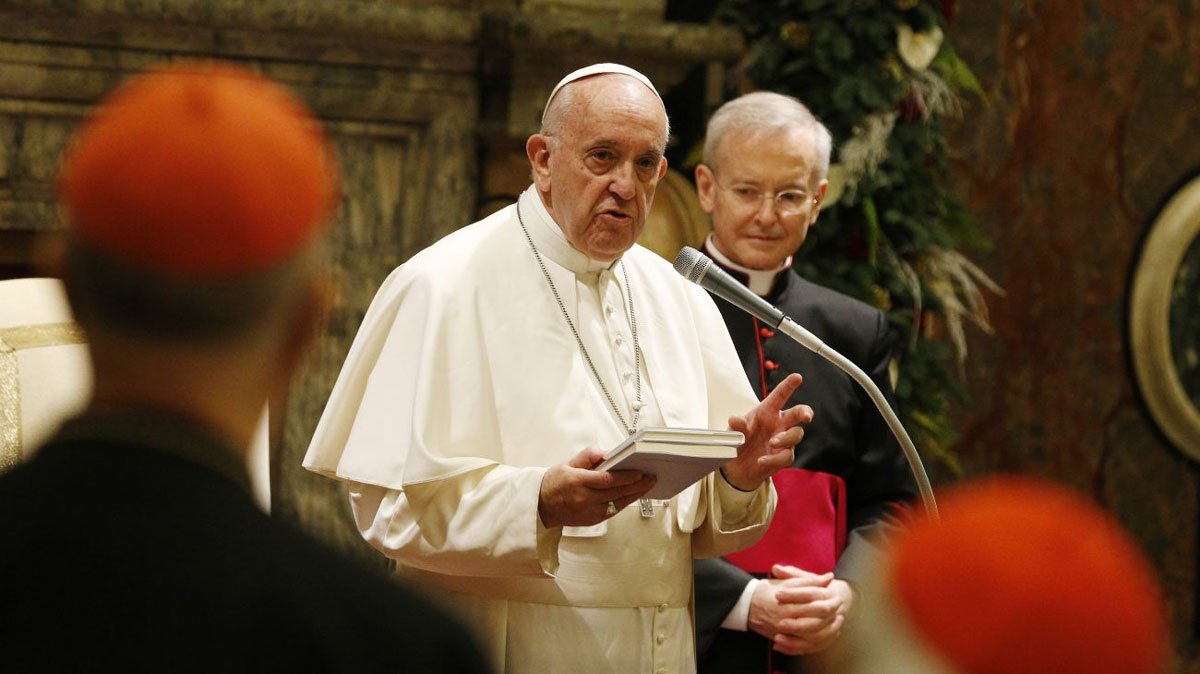 Pope Francis’s Christmas address of December 21—the traditional feast of the doubting Thomas the Apostle and of the Ember Saturday of Advent—is exactly the antithesis of the famous “hermeneutic of continuity” address delivered by Pope Benedict XVI on December 22, 2005. In that speech, Ratzinger (successfully or unsuccessfully) tried to reconnect the postconciliar experiment with the 3,000-year history of the Church as God’s Israel.

Francis is saying, in effect: “Nope, not gonna happen. In fact, we need to ramp up the modernization efforts and leave behind that stale, rigid old past. If we want to keep Christianity, we have to change everything.”

After a groanworthy citation of the Jesuits’ favorite out-of-context line from Cardinal Newman—“here below, to live is to change, and to be perfect is to have changed often”—Francis continues:

The history of God’s people – the history of the Church – has always been marked by new beginnings, displacements and changes. This journey, of course, is not just geographical, but above all symbolic: it is a summons to discover the movement of the heart, which, paradoxically, has to set out in order to remain, to change in order to be faithful…. All of this has particular importance for our time, because what we are experiencing is not simply an epoch of changes, but an epochal change. We find ourselves living at a time when change is no longer linear, but epochal. It entails decisions that rapidly transform our ways of living, of relating to one another, of communicating and thinking, of how different generations relate to one another and how we understand and experience faith and science. Often we approach change as if were a matter of simply putting on new clothes, but remaining exactly as we were before. I think of the enigmatic expression found in a famous Italian novel: “If we want everything to stay the same, then everything has to change” (The Leopard by Giuseppe Tomasi di Lampedusa).

He insists that he is not talking about incidental or accidental change:

Seen in this light, change takes on a very different aspect: from something marginal, incidental or merely external, it would become something more human and more Christian. Change would still take place, but beginning with man as its centre: an anthropological conversion.

In light of all the transhumanism and LGBTQ stuff going on, to talk about an “anthropological conversion” is pretty scary stuff. What else could it mean but a change in how we understand man himself, and how we preach and minister to him? In such words we see how faithfully Francis is following the agenda of the revolutionary faction at Vatican II who considered modernity a period unique in history, cut off from the past and requiring for Modern Man a new liturgy, a new catechesis, a new theology—in short, a new Church.