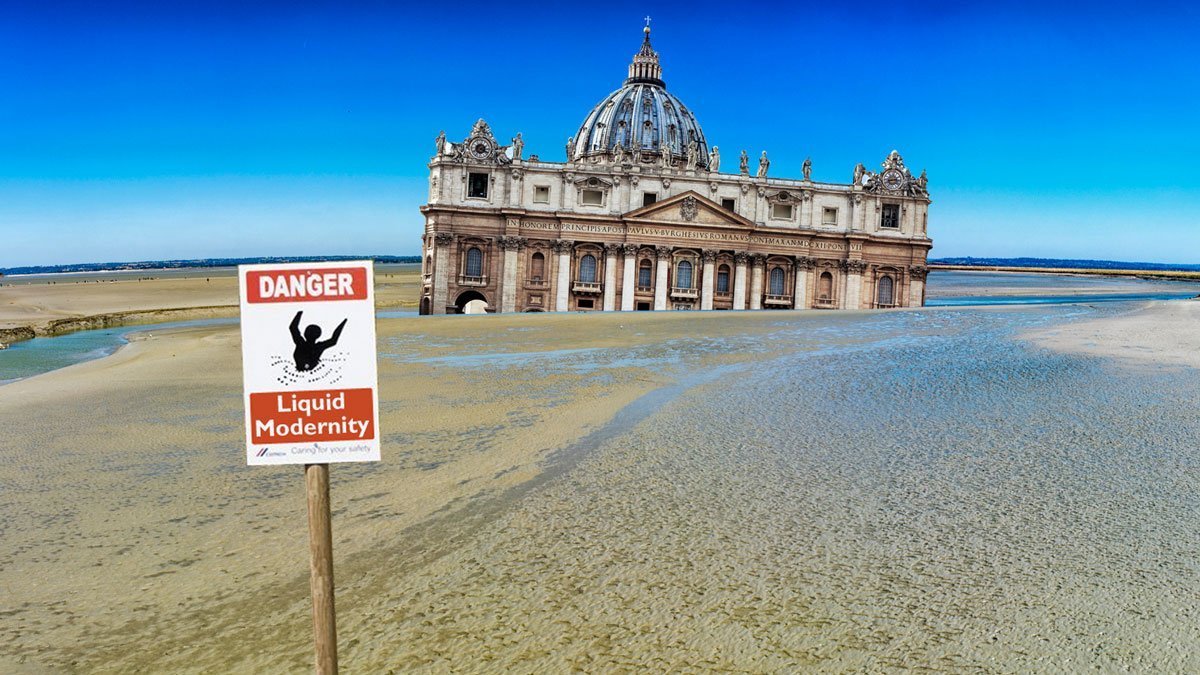 A friend — a conservative Evangelical — brought this to my attention earlier tonight. He texted (I quote this with his permission):

You know, I have never believed that the claims of the Church of Rome were true, but I have always taken a certain comfort in the belief that Rome would hold firm to its ancient convictions. And now the Ancient Faith is being transformed into the Episcopal Church before my eyes — the dismantling could be completed in less than a decade of this papacy. Of all the amazing things happening around the world this is surely the most amazing. How could anyone doubt the “liquid modernity” thesis after this?

“Liquid modernity” is the concept that the late sociologist Zygmunt Bauman came up with to describe our present condition. An explanation:

In the 1980s and 1990s, Bauman was known as a key theorist of postmodernity. While many theorists of the postmodern condition argued that it signified a radical break with modern society, Bauman contended that modernity had always been characterized by an ambivalent, “dual” nature. On the one hand, Bauman saw modern society as being largely characterized by a need for order—a need to domesticate, categorize, and rationalize the world so it would be controllable, predictable, and understandable. It is this ordering, rationalizing tendency that Max Weber saw as the characteristic force of modernization. But, on the other hand, modernity was also always characterized by radical change, by a constant overthrowing of tradition and traditional forms of economy, culture, and relationship—“all that is solid melts into air,” as Marx characterized this aspect of modern society. For Bauman, postmodernity is the result of modernity’s failure to rationalize the world and the amplification of its capacity for constant change.

In later years, Bauman felt that the term “postmodern” was problematic and started using the term liquid modernity to better describe the condition of constant mobility and change he sees in relationships, identities, and global economics within contemporary society. Instead of referring to modernity and postmodernity, Bauman writes of a transition from solid modernity to a more liquid form of social life.

For Bauman, the consequences of this move to a liquid modernity can most easily be seen in contemporary approaches to self-identity. In liquid modernity, constructing a durable identity that coheres over time and space becomes increasingly impossible, according to Bauman. We have moved from a period where we understood ourselves as “pilgrims” in search of deeper meaning to one where we act as “tourists” in search of multiple but fleeting social experiences.

What my Evangelical correspondent means is that what was once solid no longer is. The thing that seemed most solid within Christianity — the teachings of the Catholic Church — are now revealed to be made not of rock, but lava.