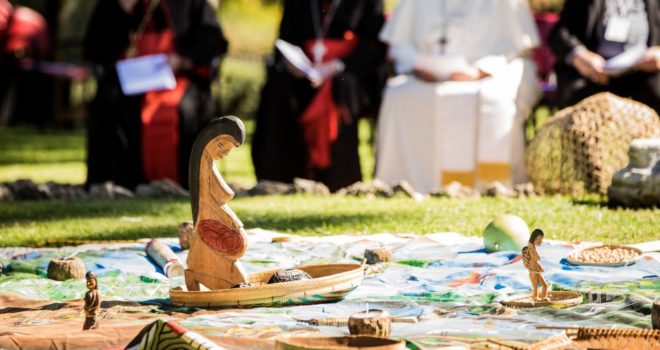 During the first press conference of the Amazonian synod Bishop David Martínez De Aguirre Guinea, O.P., one of the special secretaries appointed by Francis, gave a response that lends weight to reports that the shamanistic ritual conducted in the Vatican Gardens was, indeed, the worship of the pagan idol, Pachamama. Bishop Martínez said:

“Those who used this symbol wished it to reflect fertility, to women, to life, the life present among the Amazonian people and Amazonia as an entity full of life. I don’t think we need to make connections with the Virgin Mary or with a pagan element.”

While Bishop Martínez makes it clear that it was not the Virgin Mary, (as had been suggested), his denial that the statues of the pregnant, naked women bearing tribal markings are connected with paganism doesn’t make sense. A shaman priestess led a circle of people in prostrating themselves numerous times in homage before these idols. Getty Images’s official press photograph of the ritual, included the caption: ‘Pope Francis and Cardinal Cardinal Cláudio Hummes, Archbishop Emeritus of São Paulo, President of the Pan-Amazonian Ecclesial Network (REPAM), stand in front of a statue representing Pachamama (Mother Earth)’. Pachamama is worshiped in Latin America as a ‘goddess’ of fertility, life and the harvest, originating in Inca mythology with its bloody history of human sacrifice, especially of young children.