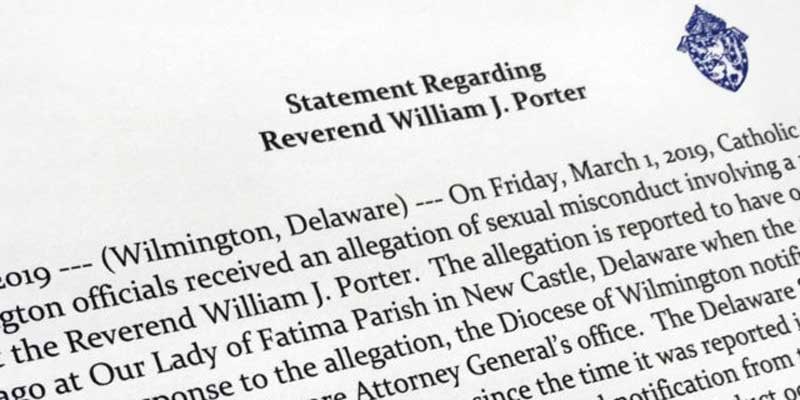 Diocese of Wilmington Bishop W. Francis Malooly has removed a priest from ministry after being informed of the conclusion of an investigation by the Delaware State Police and the Delaware Attorney General’s Office concerning sexual misconduct involving a minor in the early 1980s.

Father William J. Porter, 71, is alleged to have committed the misconduct 38 years ago at Our Lady of Fatima Parish in New Castle when the accuser was a teenager. Father Porter has most recently been pastor at Holy Name of Jesus in Pocomoke, Md., where he has served since 2003.

In response to the allegations, the diocese said in a statement released July 25, officials notified the Delaware State Police and the Delaware Attorney General’s office. They have had it under investigation since the time it was reported in March, according to the statement.

Diocesan officials said they received notification July 19 from Delaware State Police that their investigation was complete because the conduct occurred outside of the statute of limitations.

Father Porter is currently under investigation by the Wilmington Police Department for alleged similar conduct, according to the statement, which said the diocese will continue to cooperate fully with all civil authorities.

Read more at The Dialog