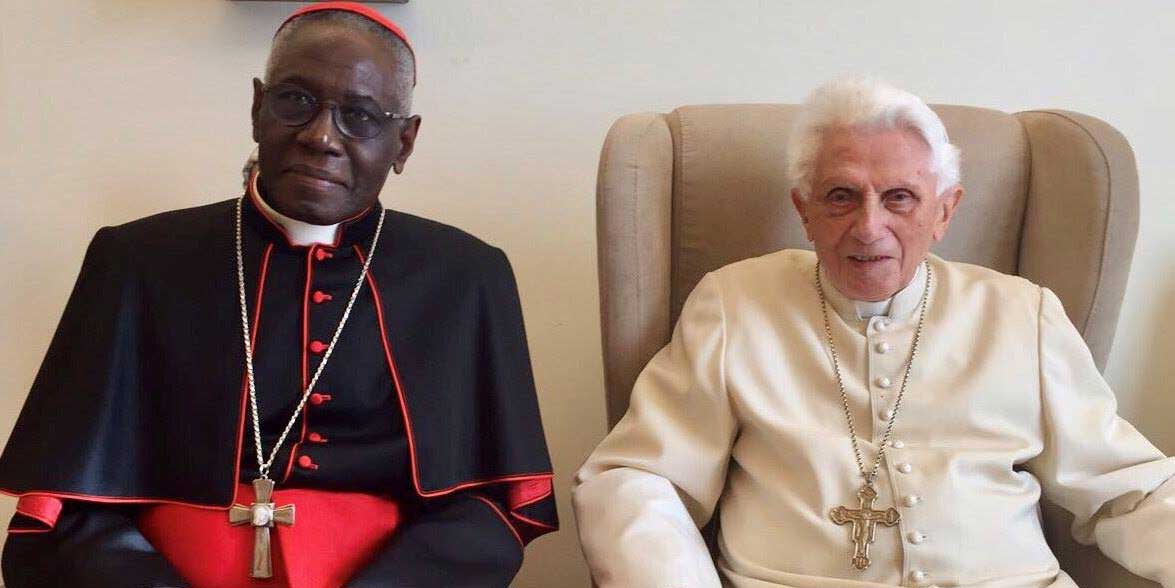 Cardinal Robert Sarah took everyone by surprise on the evening of May 14 in Rome, in the auditorium of the cultural center of the church of St. Louis of the French, when everyone was expecting him to present his latest book, entitled “Le soir approche et déjà le jour baisse,” on the Church’s crisis of faith and the decline of the West.

Because instead, the cardinal said right away, “this evening I will not talk about this book at all.” And the reason – he explained – is that “the fundamental ideas that I develop in it were illustrated, presented, and demonstrated brilliantly last April by Pope Benedict XVI in the ‘notes’ that he had composed in view of the summit of the presidents of the episcopal conferences on sexual abuse convened in Rome by Pope Francis from February 21 to 24.”

“His reflection has revealed itself to be a true source of light in the night of faith that touches the whole Church. It has prompted reactions that at times have bordered on intellectual hysteria. I have felt personally struck by the wretchedness and coarseness of several comments. We must be convinced that once again the theologian Ratzinger, whose stature is that of a true father and doctor of the Church, has seen correctly and has touched the deepest heart of the Church’s crisis.

“I would therefore like us this evening to allow ourselves to be enlightened by this demanding and luminous thought of his. How could we summarize the thesis of Benedict XVI? Allow me to simply cite him: ‘Why has pedophilia reached such proportions? In the final analysis, the reason is the absence of God.’ This is the architectonic principle of the entire reflection of the pope emeritus. This is the conclusion of his long argumentation. This must be the starting point of every investigation of the scandal of sexual abuse committed by priests, in order to propose an effective solution.

“The crisis of pedophilia in the Church, the scandalous and distressing multiplication of abuse has one and only one ultimate cause: the absence of God. Benedict XVI summarizes it in another formula that is also clear. I quote: ‘It is only where faith no longer determines the actions of man that such crimes are possible.’

“The theological genius of Joseph Ratzinger here touches not only upon his experience as pastor of souls and as bishop, as father of his priests, but also upon his personal, spiritual, and mystical experience. He goes back to the fundamental cause, he allows us to understand what the only way can be for getting out of the frightening and humiliating scandal of pedophilia. The crisis of sexual abuse is the symptom of a deeper crisis: the crisis of faith, the crisis of the sense of God.”