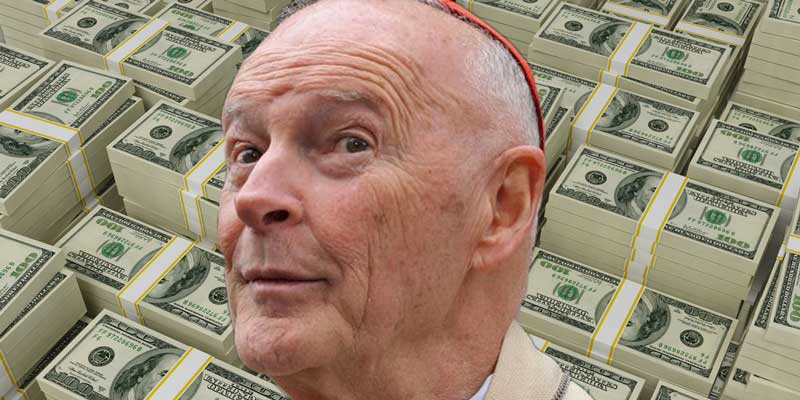 Former cardinal Theodore McCarrick was known as a money man. It was a well-known fact that McCarrick would give envelopes of cash to his brother bishops and cardinals “to thank them for their work,” a former curial official said.

He added, “Where these ‘honoraria’ came from or what they were for, exactly, was never clear — but many accepted them anyway.”

Sources close to the former cardinal confirmed he never drew a salary or pension for his work as a bishop.

One of those sources told CNA, “While he is not without resources, they are modest, in keeping with what one might expect of a parish priest.” They added that he has a private income from savings and monthly annuities that he purchased over the years.

Questions remain, however, about the scale and sources of McCarrick’s private income. If, as those close to him have indicated, he declined any formal remuneration from the dioceses he led as a bishop, what was the source for any savings he might have, and how did he come to purchase the annuities to give himself a private income in retirement?

In 2001, McCarrick started the Archbishop’s Fund, a way for him to fund his personal works of charity and pay for his “miscellaneous expenses.” Only after his fall from grace did McCarrick hand over the fund to Cdl. Donald Wuerl, McCarrick’s successor to the archdiocese of Washington, D.C.

The archdiocese refused to confirm the balance of the fund or provide any detailed financial information despite media requests from CNA, only saying that the fund had annual audits and “no irregularities were ever noticed.”