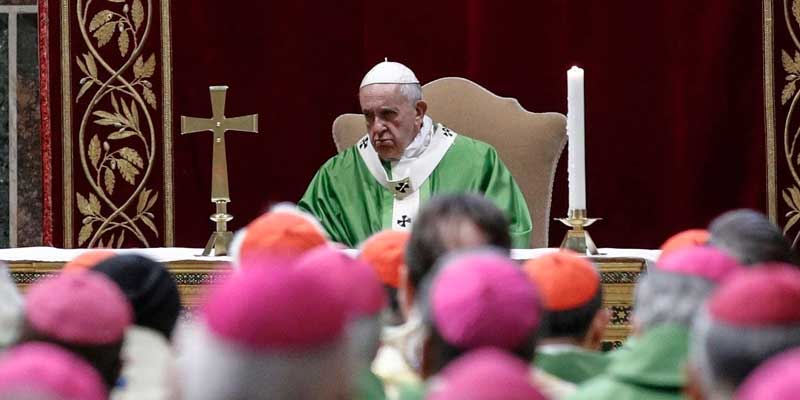 THE ESSENTIAL problem that gave rise to decades of clergy sex abuse in the Roman Catholic Church was that bishops, whose authority over their domains is all but absolute, were too often complicit in enabling pedophile priests, covering up their crimes, and looking the other way as countless young victims were raped, molested, harassed and left scarred for life. Now Pope Francis, grappling with successive waves of scandals and revelations, has decreed elaborate new policies and procedures designed to beat back a scourge that has partly defined his papacy.

Unfortunately, as with so much the pope has said and done to contain the crisis, the laws he handed down, saying that sexual abuse must “never happen again,” are half-measures. The laws outline procedures mandating that priests and nuns report suspected abuse and coverup to their superiors, provide protections for whistleblowers, accelerate investigations and require that victims be informed of investigative outcomes if they desire.

However, even as he reshaped church law, the pope left its most fundamental features intact — bishops remain in charge, policing themselves and the church, and procedures for removing and punishing them remain uncertain. That was a bitter disappointment to victims of clerical sexual abuse, and it is likely to disappoint many of the church’s faithful, already disillusioned by a scandal that exploded nearly two decades ago.

The new protocols are not toothless — among other things, they apply retroactively, meaning priests and nuns will be expected to report old cases of abuse. And in announcing them Thursday, Francis acknowledged the suffering of victims and years of failure by his two predecessors to come to terms with the crisis. The church, he said, “must continue to learn from the bitter lessons of the past.”

Yet one of those lessons — that the absence of full accountability, including to civil authorities, has deepened and prolonged the blight of abuse — seems to have gone unheeded. There will be no ironclad requirement that church authorities alert police and prosecutors when allegations of abuse arise. And while bishops in the largest church jurisdictions will be empowered to look into allegations of coverup and other wrongdoing against bishops in nearby, smaller dioceses, it strains credulity to assume that investigations carried out within the confines of those fraternities will be reliably rigorous and impartial. After all, one defining characteristic of the scandal has been the church’s demonstrated inability to police and punish its own.