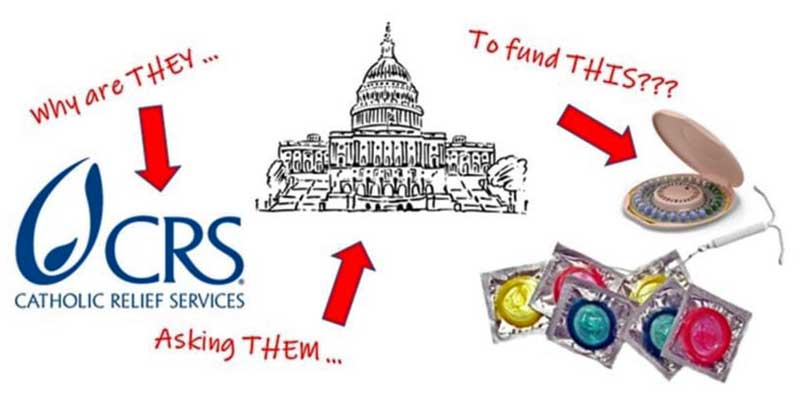 Since 2016, the Lepanto Institute has written about the congressional lobbying efforts of both the United States Conference of Catholic Bishops (USCCB) and Catholic Relief Services (CRS).

In May of 2016, we provided details regarding a joint-letter the USCCB and CRS sent to Congress requesting nearly $6 billion to be allocated for the United States Agency for International Development (USAID) and the President’s Emergency Plan for AIDS Relief (PEPFAR).  At the heart of our concern was the fact that USAID and PEPFAR together consist of the world’s largest suppliers of contraception and condoms.  The next month, we published the correspondence between a tenacious Catholic and a representative of the USCCB, who reluctantly admitted that the funding request made by the USCCB and CRS would include coverage of contraception and condoms.

Last year, we called out both the USCCB and CRS for requesting “robust funding” for PEPFAR and the Global Fund, an agency which has provided grants for the spread of contraception and even made grants directly to Planned Parenthood.

And just as in the past few years, CRS is even now lobbying Congress to provide massive funding to three agencies thoroughly committed to spreading grave moral evils.  On March 12, 2019, Catholic Relief Services gave testimony to Congress, asking for unqualified billions of dollars for USAID, PEPFAR and the Global Fund.  This funding would most assuredly include the spread of contraception and condoms.  CRS even specified its request of funding for USAID’s Maternal and Child Health programs and HIV/AIDS programs, knowing fully well that both programs are the most heavily involved with the spread of contraception.

Addressing the appropriations to the House subcommittee on State, Foreign Operations, and Related Programs, CRS Executive VP for Mission, Mobilization, and Advocacy, William O’Keefe “urged” Congress to “prioritize” increased funding for a number of federal agencies, including USAID, PEPFAR, and the Global Fund.

For USAID projects that include the spread of contraception and condoms, O’Keefe requested $1.175 billion.  He also requested $5.93 billion for the condom-distributing and promoting PEPFAR.  For the Planned Parenthood funding, contraception-pushing Global Fund, O’Keefe said, “To leverage adequate support from other donors, we ask that the committee appropriate at least $1.56 billion to the Global Fund this year.”  All told, CRS knowingly and willfully requested that Congress provide $9.24 billion to three agencies that are absolutely committed to spreading the Culture of Death.

Read the rest at the Lepanto Institute.  CRS was reportedly given the opportunity to respond to this story BEFORE it was made public.

How did they respond?  By launching a social media campaign asking for donations (see below).

All funds collected support vital Catholic programs that share in the Catholic mission of promoting the sanctity of human life and dignity of the human person. https://t.co/5VUDAOCpOu pic.twitter.com/Wa4Vu2slwh