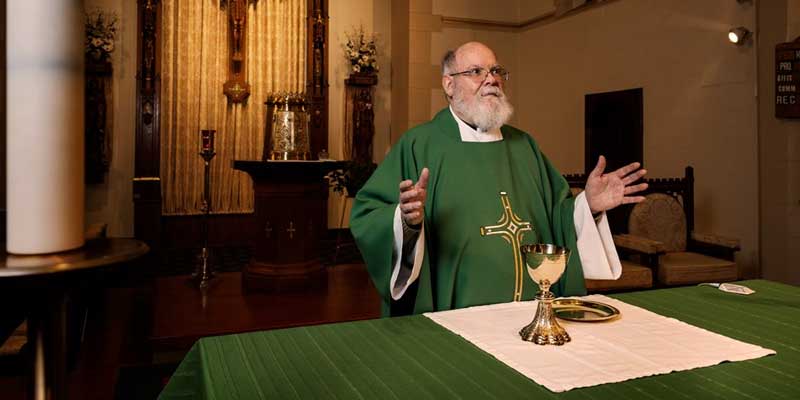 As the son of a Baptist preacher in Wisconsin, it was a huge scandal in Ronald Lemmert’s family when he converted to Catholicism and later joined the priesthood. His journey had started when he was drafted during the Vietnam War and sent to West Point, where the Catholic chapel needed an organist. “I had a very powerful conversion experience,” Lemmert says, one built around his love for the Eucharist, which Catholics believe is the body of Christ.

But soon after becoming a New York diocesan priest in 1979, Lemmert realized the church was ailing from within. On one of his first assignments, he spent a year with an alcoholic priest who stayed up all night and slept all day. After Lemmert reported him, the priest was reassigned without receiving treatment and continued to work in another parish for years. Later, Lemmert’s fellow pastor at Holy Name of Mary church in Westchester County, Gennaro “Jerry” Gentile, took altar boys to his lake house on the weekends and on overnight trips to Disney World and Italy. Eventually, two families came to Lemmert to voice their concerns that children were being sexually abused. But when Lemmert told the archdiocese, it responded by banning him from the parish, blaming the accusers and sending its vice-chancellor to defend Gentile with the archbishop’s approval.

“I’m not sure people understand how courageous Ron was in coming forward,” says Bob Hoatson, a former New Jersey priest who was suspended from his duties after creating a victims organization. “This was clearly the most powerful archdiocese in the country, maybe in the world.”

That was in the mid-1990s, and the incident led to Lemmert being ostracized, ridiculed and branded as a troublemaker. But Lemmert has been vindicated since, as the Catholic sex abuse scandal and its global cover-up has come to light, beginning with the groundbreaking Boston Globe investigation in 2002 and continuing with revelations such as the Pennsylvania grand jury report released last summer. The scandals have played a role in America’s declining number of self-identified Catholics (from 59.1 million in 2010 to 58.6 million in 2016) and slipping Mass attendance.