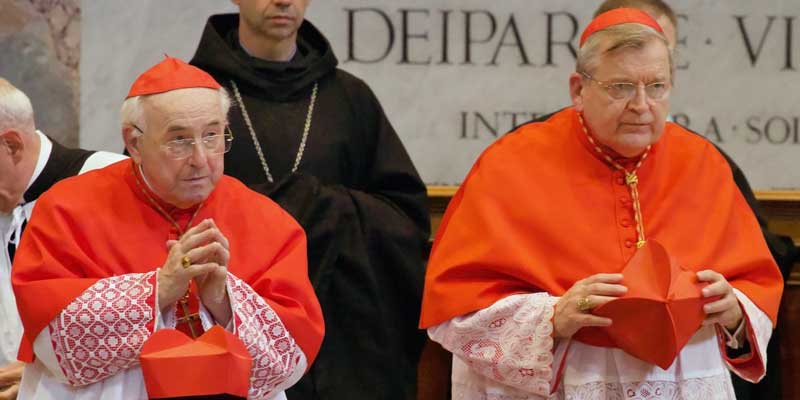 Cardinal Raymond Burke and Cardinal Walter Brandmüller have written an open letter to the presidents of bishops’ conferences attending this week’s Vatican summit on clerical sex abuse, calling on them to end their silence and return to upholding the divine and natural law.

In the letter released Feb. 19, they argue that the abuse crisis is only part of a wider and much deeper problem that owes itself to a society that openly calls into question an absolute moral law, and Church leaders who have “gone away from the truth of the Gospel.”

“A decisive act now is urgent and necessary,” the cardinals say, and call for an end to the “plague of the homosexual agenda” in the Church, organized networks of protection, and a “climate of complicity and a conspiracy of silence.”

In comments to the media on the open letter, Cardinal Burke said: “Given the incontrovertible state of confusion and error in the Church regarding the most fundamental moral questions, pastors of souls must raise their voices to defend the teaching of Christ and His Church. “Silence is cooperation with the ever-spreading confusion and division which is bringing serious harm to many souls,” he added.

The cardinals begin the letter by saying: “We turn to you with deep distress!,” and add that the Catholic world is “adrift” with people asking: “Where is the Church going?”

The  American and German cardinals say sexual abuse is “blamed on clericalism” but, for them, the “first and primary fault of the clergy does not rest in the abuse of power but in having gone away from the truth of the Gospel.”

“The even public denial, by words and by acts, of the divine and natural law, is at the root of the evil that corrupts certain circles in the Church,” the cardinals continue.

But “in the face of this situation, cardinals and bishops are silent,” they observe, and ask the Pope and bishops if they, too, will be silent during the Feb. 21-24 Vatican summit.