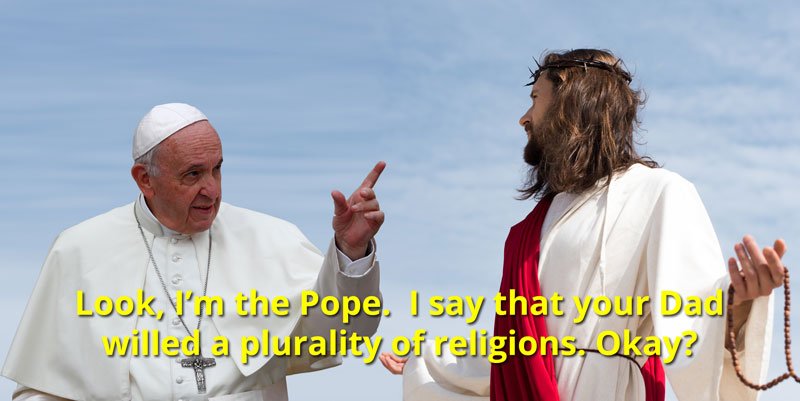 On February 4th 2019, Pope Francis and Ahmad Al-Tayyeb, the Grand Imam of Al-Azhar Mosque, signed a ‘Document on Human Fraternity‘. The document and its signing were public acts. It contains the following passage:

‘Freedom is a right of every person: each individual enjoys the freedom of belief, thought, expression and action. The pluralism and the diversity of religions, colour, sex, race and language are willed by God in His wisdom, through which He created human beings. This divine wisdom is the source from which the right to freedom of belief and the freedom to be different derives.’

Taken in its normal meaning, the statement that the pluralism and diversity of religions is willed by God in his wisdom is directly contrary to the Catholic faith. The pluralism and diversity of religions is an evil, and as such cannot be willed by God. These religions contradict each other on doctrinal and moral issues. It must therefore be the case that at least some of these religions are in error where they disagree; and it is a grave evil to hold false dogmatic and moral beliefs. Moreover, the Christian teaching is that there is only one true religion, the religion that worships the Most Holy Trinity. Religions that do not worship the Holy Trinity are false religions, that in themselves cause harm to their worshipers. As such, they are evils.

Many Catholics are reluctant to see this assertion as an act of heresy or apostasy by Pope Francis. In order to do so, they must interpret these words in a sense that can be reconciled with Catholic teaching. Fr. John Zuhlsdorf has offered such an interpretation. He remarks:

When we speak of God’s will we make distinctions. God has an “active or positive will” and a “permissive will”. God’s “active will” concerns that which is good, true and beautiful. On the other hand, God has a “permissive will” by which He allows that things will take place that are not in accord with the order He established For example, God created Adam and Eve to live a certain way according to their nature and His will. However, He foresaw that they would fall and He permitted them to fall. By His active will they were to live a certain way. By His permissive will they strayed and fell. In the end, even all that God permits to go wrong will eventually be righted.

Applying the distinction between God’s active will and God’s permissive will to Pope Francis’s words, and interpreting the words as asserting that the plurality of religions is the object of God’s permissive will rather than of His active will, is the only way of understanding them in a Christian sense. The question is whether these words can be understood in this sense.