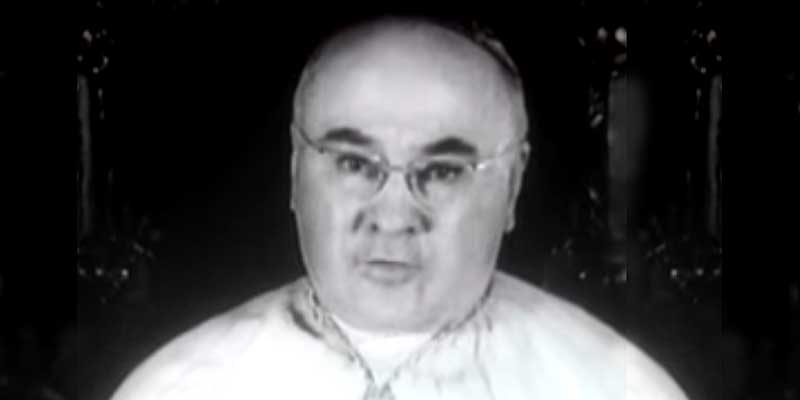 Lucian K. Truscott IV writes about the time he, as a West Point cadet, went to visit Cardinal Francis Spellman, the Archbishop of New York, for a cadet magazine interview. Spellman granted the interview in part because Truscott’s grandfather was a famous general whom Spellman had known in World War II. It was a memorable encounter. Excerpts:

We were led into a sitting room with windows overlooking Madison Avenue. Spellman, a diminutive, fleshy square-faced man wearing wire-rimmed spectacles was seated in a corner of the room. His assistant the monsignor showed me to a chair next to him. I took my seat and got out my pen and notebook and started the interview, but before I could even ask my first question, Spellman put his hand on my thigh and started moving it toward my crotch. He was just about to reach my private parts when the monsignor, who was standing behind him, reached over his shoulder and grabbed his wrist and put his hand back in his lap. “Now, now, eminence,” the monsignor whispered to Spellman.

I had no idea what to do. I was afraid I would be punished or even accused of lying if I reported Spellman to the authorities at West Point. I mean, he was Cardinal Spellman! He was the military vicar of the United States! I was panicked that if I stood up and left, I wouldn’t get the interview I needed for my story. I had sold the story and the New York trip to the officer in charge of The Pointer on the basis of writing a profile of Spellman in advance of the Thayer Award ceremony. I was dumbstruck. I just sat there, frozen.

There was an out-of-body aspect to the whole thing. It was like it was happening to someone else. There I was in this rather large room behind St. Patrick’s Cathedral with two of my West Point buddies and this six-foot tall 30ish monsignor looking on, and each time Spellman groped me, I thought, surely, this is the last time it will happen. I mean, there were three other people present! He’s going to come to his senses!

But he didn’t. He wasn’t a doddering old senile fool, either. He answered my questions lucidly and even embellished his answers with long, digressive stories. At one point, he recalled the first day of the Anzio invasion and went on about what a dashing figure my grandfather cut in his leather jacket and cavalry riding breeches and white neck scarf, the colorful uniform he was famous for wearing during the war. The monsignor didn’t say a word about the cardinal’s behavior when he escorted us out of the cardinal’s residence. No apology, no shrug of the shoulders, nothing.

Truscott says he wishes he hadn’t stayed quiet about it all these years. He feels that his silence in some way aided and abetted the culture of sexual abuse and cover-up. The thing is, if he had said what he knew, who would have believed him? I mean, he was Cardinal Spellman!

Read the rest at the American Conservative