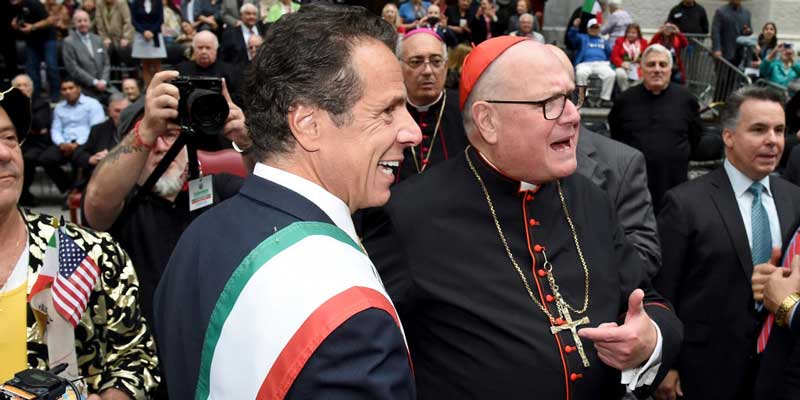 Bishops may not wish to be ‘politicians or culture warriors,’ but they are required to speak with clarity on what is and is not acceptable for a Catholic to do, say and believe.

Sixty years ago, John F. Kennedy insisted that his Catholicism was a private matter, and a generation of politicians followed suit. New York Gov. Mario Cuomo in 1984 famously declared himself “privately opposed” to abortion but obliged to support it publicly in the name of representing the whole people.

Last week, Cuomo’s son and successor as governor of New York, Andrew Cuomo, signed an expansive abortion bill into law, effectively giving license to kill a child up to the moment of birth. In addition to signing the bill, Cuomo enthusiastically campaigned for it, insisting he wanted to enshrine abortion rights in state law “in a way no one else has before,” and celebrated its passage.

In response to the New York law, Catholics have been taking to social media and major newspapers to demand that the bishops take personal action against Cuomo. Many are calling for his excommunication.

Bishop Richard Stika of Knoxville, Tennessee, and Bishop Joseph Strickland of Tyler, Texas, suggested they sided with those calls.

Closer to home for Cuomo, Bishop Edward Scharfenberger of Albany gave an interview Friday evening in which he acknowledged the calls of some Catholics for Cuomo’s excommunication, calling the measure a “very extreme thing to do,” but allowing there were “other measures” that could be taken.

Just before the passage of the bill, Cardinal Timothy Dolan of New York issued a strongly worded post on his personal blog, condemning the law and the culture of death it represents, but noting that bishops are not supposed to be “culture warriors or politicians.” In response to recent calls for Cuomo’s excommunication, Cardinal Dolan said excommunication was not “a weapon,” or indeed something to be called for out of “anger and frustration.”

Moreover, Cardinal Dolan noted on Fox and Friends that applying such a public penalty might just give the governor an applause line, rather than prick his conscience. Cuomo and other politicians like him are often seen to revel in conflict with the Church.

In a Jan. 28 commentary published by the New York Post, the cardinal noted that while he is “a pastor, not a politician,” he “feels obliged” to call attention to Cuomo’s support for the “ghoulish radical abortion-expansion law” as one of several recent actions by the governor that have contributed to making this “a rough time for faithful Catholics in our state’s frantic rush for ‘progressive ideas.’”

Times have certainly changed. Under terms of the elder Cuomo’s offered truce, bishops did not publicly call out Catholic politicians, but those politicians didn’t play up their faith — or lack of it — for moral credibility.

While Cuomo the Younger may enjoy being at loggerheads with the Church on abortion, he has been quick to invoke his Catholicism, often citing the importance of his faith and claiming to “stand with Pope Francis” in support of legislative priorities that complement his political agenda.

Indeed, a fair number of Catholics in public life, like Cuomo, have taken to identifying themselves as “Pope Francis Catholics” on issues like immigration, while championing extreme abortion positions — something that Francis has equated to genocide and eugenics.

In doing so, these politicians are not just going against the teaching of the Church, but co-opting her moral authority, and that of the Pope, for public political ends.

Bishops often speak of not wanting to get out the “sledgehammer” of canonical penalties, and some do tend to think of disciplinary measures as a crude instrument. Others, like Cardinal Dolan, say they do not want to see what is meant to be a medicinal remedy wielded like a weapon.

But public penalties, including medicinal ones, become necessary when politicians insist on being very public bad Catholics.