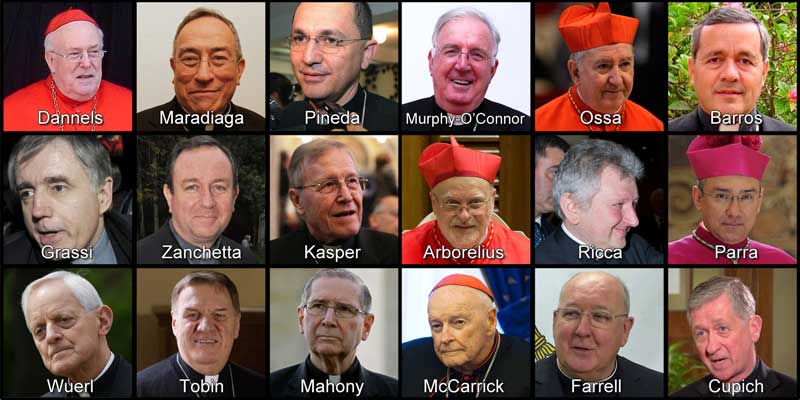 The least we can say is that the figure of Pope Bergoglio is embarrassing. Perhaps not so much for who he is as a person in himself – but then again… But more so for the people whom he obviously favors, protects, and defends. Or for those who actively contributed to his election.

Let’s begin with this last group. Among them there are Cardinal Danneels, immortalized as the one standing next to the pontiff on the loggia on the night of his election. Danneels covered up a bishop who had abused his own nephew, and a petition from laypeople had in fact requested that he not participate in the Conclave. But Danneels was then invited by the pope to be part of the Synod on the Family. Those who worked to elect Bergoglio also included McCarrick (he said so himself) and Mahony of Los Angeles, who a judicial investigation revealed had covered up dozens of abuser priests and who was ordered to lead a secluded life of prayer by his successor, Archbishop Gomez (who, strangely, was never made a cardinal, perhaps because he did not have any skeletons in his closet and is a member of Opus Dei…). Mahony was supposed to go to an important event last year as a pontifical representative despite the ban on his presence at public events, but a protest of laypeople prevented him. Yet Roger Mahony is scheduled to speak this coming March at the Los Angeles Education Congress – an evident sign of papal favor persisting despite abuse and cover-ups. Then there was – may he rest in peace – Cardinal Murphy O’Connor. He had transferred a serial abuser priest (later found guilty) from one place to another, where he had repeatedly abused. O’Connor was particularly favored by the pope: the pope interrupted Cardinal Müller, prefect of the Congregation for the Doctrine of the Faith, during the middle of the celebration of Mass and angrily ordered him to close the investigation of Murphy O’Connor for abuse. And then there is Cardinal Errazuriz Ossa in Chile (who covered up the notorious sexual abuser Father Fernando Karadima), and probably we are still forgetting some others.

The past is the past, you will say. However, the problem is that the present, the current mess, appears to be not at all different. Let’s leave aside the case of the Chilean bishop Juan Barros, who was given charge of a diocese despite justified protests and the lies spoken by the pontiff regarding the victims. Let’s look at the case of Bishop Juan José Pineda, right-hand man of Cardinal Oscar Maradiaga of Honduras, forced to resign by a letter from seminarians accusing him of sexually molesting them. Pineda had lived with his one of his lovers in Maradiaga’s villa in Tegucigalpa. Is it possible that the Honduran cardinal, himself the right-hand man and great inspirer of the pope, seeing a handsome young man at breakfast in his house, did not ask, “Who is this?” Monsignor Ricca, whose diplomatic career was swept away by a homosexual scandal, was nominated by the pope as director of the Vatican Bank (IOR). Now we have the case of Bishop Gustavo Zanchetta of Argentina, who was not only taken in at the Vatican after fleeing Argentina, but also had a position created just for him that previously did not exist, as assessor of APSA, the Administration of the Patrimony of the Apostolic See, the treasury of the Holy See. This despite the financial scandals that had taken place in his diocese of Oran (to say nothing of the sexual ones). The accusations and suspicions do not even exclude the new Sostituto of the Secretariate of State, Archbishop Edgar Peña Parra of Venezuela, close friend of Pineda (see above) and of Maradiaga.