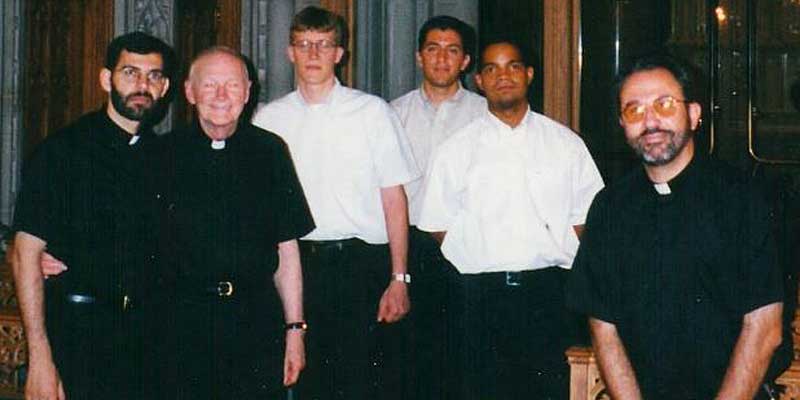 Author’s Note: Back on June 30, 2002, I wrote the following Remnant article on the now-infamous Dallas meeting of bishops (convened under the pretense of addressing the clergy sex abuse crisis). That utterly impotent meeting would go on to produce the now-laughable “Charter for the Protection of Children and Young People”, drafted by — wait for it! — Cardinal Theodore McCarrick.

At the Dallas meeting, Uncle Ted was allowed to make a mockery of the entire Conference by prancing around like a lady from “The View”, pretending to care about victims of clerical sexual abuse while his brother bishops sat on their hands and said nothing about the biggest abuser of them all.

We know how that story ended.

We’re reproducing this 16-year-old article by way of providing archival proof that certainly by as late as 2002, all of us were scandalized, sick and tired of the homosexual problem in the priesthood.  For a couple of decades prior to that, in fact, thinking, believing, breathing Catholics had no delusions about the extent of the problem and certainly had no trouble imagining how high up the hierarchical latter the cover-up went.

Between the close of the Council and the Dallas meeting (leading up the John Jay Report in 2004) we’d seen a pope personally accused of being a homosexual, the head of the CDF issue a directive on the pastoral care of homosexuals in the Church (but call for an end to their admission into seminaries), nine men file formal charges (ignored by the reigning pontiff at the time, of course) against the powerful Legion of Christ founder Fr. Marcial Maciel, and, of course, Cardinal Bernard Law’s scandal and resignation on December 13, 2002.  All of this after having long since grown painfully aware of the fact that the Roman Rite itself had become so emasculated as to seem almost tailor-made for a homosexual clergy.

We knew very well what was going on. And yet, somehow, in the face of the unspeakable scandal of systemic infiltration of the priesthood, the lowly “rad trads” continued to fight for their besieged holy Mother Church, held captive by an occupying force hellbent on defiling her.

It never even occurred to us to jump the wall and leave the Church in disgust. Our Mother—pure and inviolate—was under siege, and it seemed to us that the duty of her loyal sons and daughters was not to abandon her in the face of those who would violate her.

Today, McCarrick has fallen, the bishops are exposed, and the great façade is shaken to its vile foundations. But we’re still here in the trenches, fighting like hell against the forces of Hell that got over walls. We’re no heroes… just angry Catholics for whom defecting is simply not an option. Not then. Not now. Not ever.  MJM

Read the original 2002 article at The Remnant