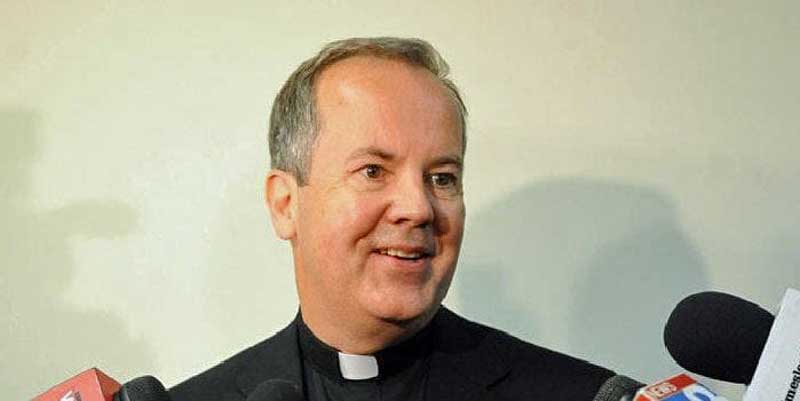 Bishop Bambera protects the scandalous while punishing the orthodox.

In 2017, homosexual activists celebrated Bishop Joseph Bambera of Scranton, Pennsylvania, for allowing a heretical priest to speak at a Catholic university in his diocese.
“A Catholic college and Pennsylvania bishop are the latest public supporters of Fr. James Martin, SJ, after they refused to concede to right-wing activists who wanted the priest disinvited from a scheduled speaking appearance,” burbled a press release from New Ways Ministry, an LGBT group that seeks to change the Church’s moral teachings. “Conservative activists had targeted Misericordia University for inviting Martin speak at the winter commencement this December of the school located in Dallas, Pennsylvania…. This latest show of support from Bishop Bambera and Misericordia University is significant because they stood directly against the very groups to which church officials have frequently conceded, and conceded to the detriment of the church. Their defense will help grow the positive impact on the church that Martin’s book has had, even as the book and its author have drawn criticism from all sides.”

Orthodox priests in Scranton enjoy no such liberty to speak their minds under Bishop Bambera. Nicknamed “Bambi” by some of his priests for his role in enabling a gay clergy, Bambera is known for harassing faithful priests who tell the truth about the pederasty scandal in the Church. One such priest contacted me recounting the harassment he received after delivered a homily in which he lamented the neutralizing effect Pope Francis had on the feckless U.S. bishops’ gathering in Baltimore, a sermon his congregation greeted with applause. “I received nothing but positive feedback,” he said. But word of the sermon critical of Pope Francis and the U.S. bishops got back to Bambera, who dispatched an aide to chew the priest out.

Bambera’s Vicar of Clergy, Fr. Jeffrey Walsh, button-holed this priest at a November priests’ gathering to tell him that he was “out of line” to give such a homily. “He went on to tell me that ‘the bishop thinks’ that I am ‘being divisive,’” according to the priest. “I told him that the faithful deserve to know the truth. He fired back stating it is okay to say things like that in the midst of fellow priests but that it was inappropriate to speak like that in front of laypeople. I was shocked at his comments. It is okay to speak the truth to priests but not to the lay faithful?”