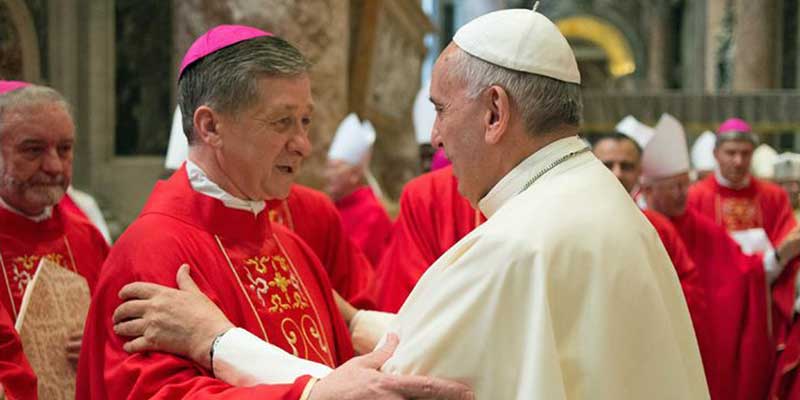 The winds of scandal whipping around the Church’s gay pederasty problem are not dissipating but picking up speed. This is foiling the devious plans of Pope Francis, who deliberately scheduled his “abuse summit” six months out in the hopes that few would care about it by then. News of that quickie gathering of bishops scheduled for next February commanded little respect from the laity before this week, but even less now that its primary American organizer has been announced — Blase Cupich, who owes his elevation in large part, according to Archbishop Carlo Viganò, to the very molester, Theodore McCarrick, whose scandal the summit will supposedly address.

It was McCarrick who whispered in the pope’s ear about appointing the relatively obscure Cupich to the immensely important archdiocese of Chicago. Overnight this appointment turned the nebbishy Cupich into the most powerful cardinal in America. In Baltimore at the fall bishops’ conference, Cupich was reveling in this status, playing with his cufflinks as he held court before awed staffers.

Cupich is of course the least credible American figure to address the abuse crisis. His resolve to purge the mini-McCarricks who populate the priesthood and hierarchy from the Church is nil. To the critical question — Should the Church continue to ordain homosexuals? — Cupich’s answer is a resounding yes. This, along with his left-wing politics, has turned him into a media darling. Notice that all of the media’s recent take-downs of derelict leadership steer clear of Chicago.

Cupich has famously vowed not to follow Viganò down his “rabbit hole” and says he will focus instead on the promotion of the pope’s enviro-socialist political program. At the Baltimore conference, Cupich was running interference for double-living prelates, urging his colleagues to see such misconduct as “consensual” and thus not worthy of strict regulation.

Cardinal Oswald Garcia of Mumbai, by the way, is also on the abuse summit’s organizing committee. He is the Cupich of India, so brainwashed by the pope’s moral relativism that he has taken to telling socially conservative Indians that they need to lighten up about LGBT rights. Garcia has also been known to censor out of his priests’ homilies any “offensive” references to the sinfulness of homosexual behavior.

Please be sure to also watch this episode of the Vortex for a list of reasons Cupich should be disqualified from even being considered to help organize the 2019 Abuse Summit.

UPDATE: Another video worth watching, at least in part, regarding Blase Cupich.