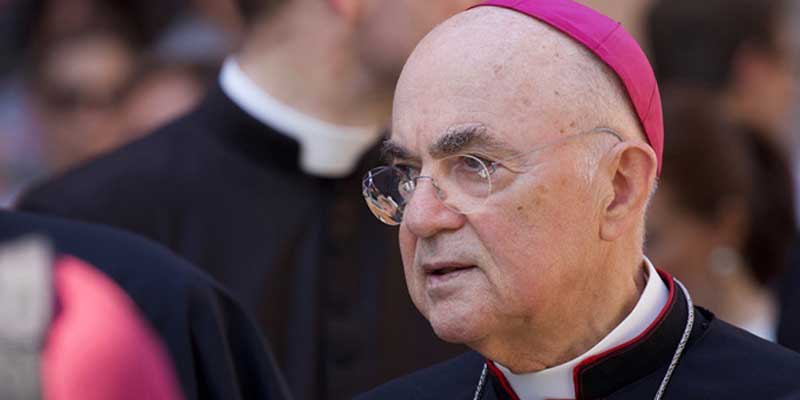 In thin-skinned times such as these, Archbishop Viganò’s most recent letter shines forth as a clarion call to Catholics everywhere.

As I finished reading Archbishop Carlo Maria Viganò’s third letter, I had an immediate sense that I had just read something that is destined to be one of the great pastoral and literary moments of the Church’s history. There was an air of greatness about it that I cannot fully describe. I was stunned at its soteriological quality — at its stirring and yet stark reminder of our own judgment day. In effect he reminded us that this is more than a quibble over terminology or who wins on this or that point, or who is respectful enough of whom. This is about the salvation of souls, including our own. We almost never hear bishops or priests speak like this today!

Others will write adequately on the canonical, ecclesial and political aspects of Archbishop Viganò latest and very concise summary of the case. As most of you know, I have fully affirmed elsewhere that I find his allegations credible and that they should be fully investigated. But in this post I want to explore further the priestly qualities manifest in this third letter, qualities that are too often missing in action today.

To begin with, he has in mind the moral condition of souls. The Archbishop warns in several places of the danger posed to the souls of the faithful by the silence and confusing actions of many bishops and priests and the Pope. He laments that this, along with the homosexual subculture in the Church, “continues to wreak great harm in the Church — harm to so many innocent souls, to young priestly vocations, and to the faithful at large.”

A long time ago, in a galaxy far, far away, this was the first concern of most every priest: the moral condition of souls, including his own. Today, many bishops and priests, as well as many parents and other leaders in the Church, seem far more concerned with the feelings, and emotional happiness of those under their care than with their actual moral condition. They worry more about political correctness and not upsetting those who engage in identity politics and base their whole identity on aberrant and sinful habits and disordered inclinations. That a person be pleased and affirmed today is seemingly more important than that they be summoned to repentance and healing or be made ready for their judgment day. Passing and apparent happiness eclipses true and eternal happiness. Further, silence in the face of horrible sin, deferring to and fawning over powerful churchmen, and cultural leaders of this world seems to outweigh any concern for the harm caused to the souls and lives of others.

Yes, too often, the only thing that really matters, the salvation of souls, is hardly considered. As others have rightly pointed out, this points to a loss of faith and a bland universalism wherein all, or the vast majority, attain to Heaven. Further, the possibility of Hell is all but dismissed — almost never preached, let alone considered a factor in how we should pastorally guide people.