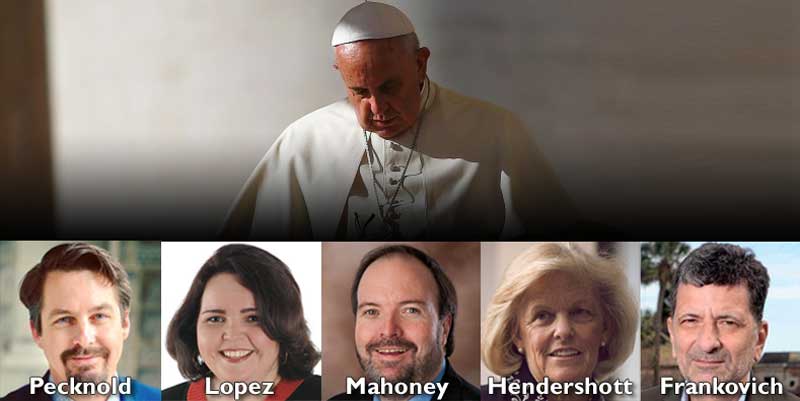 In this time of turmoil, the editors of National Review asked five Catholic writers to weigh in.

In the most recent issue of National Review (“The Case against Pope Francis,” October 29, 2018), NR senior writer Michael Brendan Dougherty wrote, “The Francis pontificate was to be an era of mercy for sinners at the peripheries and accountability for malefactors at the Vatican. Instead, almost the opposite has taken place.” According to Dougherty, the Roman Catholic Church’s “twin scandals” — the calamitous handling and coverup of clerical sexual abuse, and the the pope’s efforts to foment a “Theological Revolution” on sex, marriage, and the sacraments — have exposed deep divisions within the Church. In this time of turmoil, the editors of National Review asked five eminent thinkers to weigh in.

Conservatives have usually viewed the pope as a moral makeweight against the constant threat of social and political disorder. The papacies of John Paul II and Benedict XVI sought to reassure the world that the Church was indeed a bulwark against “the dictatorship of relativism.” Even as Michael Brendan Dougherty provocatively makes “The Case against Pope Francis,” his working assumption is simply that this is not how things are supposed to go: Popes are not supposed to resign, nor are bishops supposed to “make a mess.” Dougherty’s claim that the Holy Father promotes men who are “morally compromised and doctrinally suspect” is a lament that the Church is suffering because of a fundamental weakness in its hierarchy that runs from top to bottom. After the “summer of shame” the case for its being morally compromised hardly needs to be made. About those men trained as priests in the ’60s, ’70s, and ’80s (those darkest of decades), it’s tempting to say the whole generation is compromised. But what if that’s true yet also misleads us about the state of the Church or the papacy? The hierarchy could be worse now than it was during the Arian crisis, the papacy more compromised than it was at Avignon. I’m just not sure.

If we add up all the failures that Dougherty rightly names as such, are we seeing the whole, or merely the earthly parts of the Church which have always been in desperate need of purification? The failures of the hierarchy have become much more visible under Pope Francis. But if the corruption of the best is the worst, what do we say about the corruption of the mediocre? Isn’t it on the whole a good thing that the corruption before us is inextricably bound up with the failed strategy of accommodation to progressive ideals — a strategy that will forever be understood as an accommodation of sin rather than resistance to it? Aren’t we seeing the apotheosis of the so-called “hermeneutic of rupture” manifested in precisely the moral relativism and doctrinal confusion that Dougherty laments? No papacy has been without providential purpose. Not one pope has been so bad that saints have not been made by God during his reign. And I’ll hazard a guess that the Catholic Church is no weaker now than it was when the Lord slept in the storm-tossed boat as his disciples fretted. The bulwark remains, but it’s never been the hierarchy, or the earthly parts of the Church. The bulwark is the Lord who is in the boat.

— C. C. Pecknold is an associate professor of theology at the Catholic University of America in Washington, D.C.

Kudos to Michael Brendan Dougherty for writing such a frank diagnosis of the pathologies at the heart of the pontificate of Pope Francis. He has hit the nail on the head. Dougherty is undoubtedly correct: There is “a type of churchman that Francis seems to favor: the morally compromised and the doctrinally suspect.” It is no accident, as the Marxists used to say, that all of Francis’s major episcopal appointments in the United States (and now candidates for the College of Cardinals) are protégés of the disgraced former cardinal Theodore McCarrick. These appointees, like the pope, want to “change” the Church, erase a sense of sin, and reduce Christianity to a humanitarian and leftist simulacra of its true self. They are, at best, half-Catholics, or no Catholics at all. They dismiss age-old doctrine and the natural moral law breezily in the name of a vague historicism, a “kneeling before the world,” as Jacques Maritain so aptly put it in the heady days of the Second Vatican Council. The Holy Spirit, whom they routinely ritualistically invoke, somehow always seems to be on “the right side of History.” As Dougherty brilliantly demonstrates, these men reduce the gospel to a barely attainable “objective ideal,” one that won’t get in the way of accommodating democratic relativism or a corrupt notion of mercy that never asks imperfect human beings to repent or turn to the light of God. In so doing, they make a mockery of the apostolic teaching the Church is charged to protect and sustain.

Pope Benedict XVI insisted in his magisterial Regensburg address in 2006 that Christianity is never reducible to a “humanitarian moral message.” But that reduction is precisely what Francis and his acolytes insist upon, systematically accommodating late modernity with fevered abandon. They indulge leftist tyrannies in Cuba and Venezuela that are deeply hostile to the Christian faith. The head of the Pontifical Academy of Social Sciences, a Mexican bishop with liberationist sympathies, recently went so far as to praise Communist China as the country that best instantiates Catholic social teaching. One had thought, mistakenly it seems, that such teaching had something to do with respect for political and religious liberty, and with the safeguarding of the liberties and prerogatives of the Church. But apparently not. The Church they announce is the left-wing party at prayer, one that believes, as Dougherty so strikingly puts it, that “believing in sin is now worse than sin itself.” There is nothing holy or heroic, nothing even solid or decent, about such an undemanding vision.

One must add that Pope Francis himself is increasingly autocratic and bereft of sympathy for those who remain faithful to traditional Church teachings: They are, in his view, “rigid,” doctrinaire, and heartless and must be driven from a transformed Church. His inner circle shamelessly castigates a truth-teller such as Archbishop Viganò. Francis acts more like an oriental potentate, an agent of revolutionary change, than a guardian of Christ’s teaching. He will leave behind a Church that is hopelessly politicized, morally lax, and at odds with any traditionally Christian understanding of sin and repentance — a Church that has no place for the grace and mercy that lie at the heart of God’s demanding love. At least the Borgia and Medici popes, however personally corrupt they may have been, deferred to Catholic doctrine. Francis’s “humanitarian” substitute for a recognizably Catholic dispensation will speed up the decline of the Church and the dechristianization of the West.

This is a time to pray for the protection and intervention of a providential God. The Church speaks to men’s souls when it resists the allure of the zeitgeist and courageously speaks what Pope John Paul II liked to call “the truth about man.” This is a time for courage and truth.\

— Daniel J. Mahoney holds the Augustine Chair in Distinguished Scholarship at Assumption College. His book, The Idol of Our Age: How the Religion of Humanity Subverts Christianity, will be published by Encounter Books this fall.