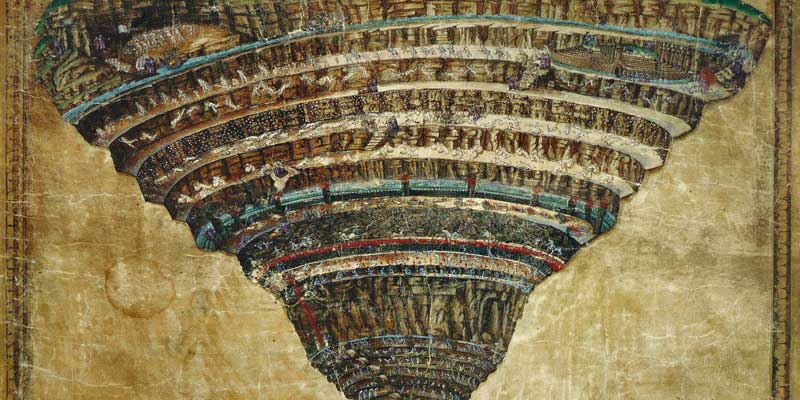 In these bad days I have called to mind Dante’s Inferno.  I think of the structure of the City of Dis, the Hell within Hell.  Outside of its miserable walls are punished those sinners who gave in to immoderate desires for things that are naturally good, such as the intercourse of the sexes, male and female, food and drink, and wealth; and who misused faculties that are natural to the human person, such as anger and the longing for rest.

But your ticket for entry into Dis is an active malice, the tang of loving things that are simply evil.

The first of these sinners are the heretics, whose prime representatives are men of powerful intellect who denied the immortality of the soul, and therefore cut themselves off intellectually from the roots of life itself.  It is an offense against the image of God in man.  They dwell in tombs just within the walls of Dis, and are as it were the front end of a pair of brackets, enclosing all of Dis’s depraved citizens.

At the other end, in Hell’s dead center and bottom, we will find the traitors, the worst of whom, Judas Iscariot, is chewed and mangled forever by the worst of the fallen angels, Satan.

Between heresy and treachery lie violence and fraud, the lion and the fox.  Fraud is more wicked than violence, Dante says, because it perverts man’s highest power, that of the mind; therefore it is punished in a lower ring, that of the Malebolge, the ten Pouches of Evil.

In one of those pouches we find the Simoniacs, those who traded in ecclesiastical offices; they are planted upside down in holes in the ground that parody the baptismal font, with their feet slicked with oil and set aflame.

The violent are divided into three groups, according to the victim of the violence: worst are the violent against God Himself.  These suffer the punishment of a rain of fire-flakes that spark the burning sands beneath them.  They must take that fire lying down (blasphemers), sitting at the brink of the gulf of the fraudulent (the usurers), or racing about continually (the sodomites).

If Nature is the daughter of God, Dante reasons, then those who violate Nature in their sexual deeds, meant for the bringing of new life into the world, show their contempt of the Creator Himself.  If human industry is the daughter of Nature, then those who do nothing for their wealth but rub coins together to make them breed are blasphemers too, as are the sodomites.

It is not pleasant to ask where in this scheme the wicked prelates of our time belong.  Perhaps the question is too narrow.  In our age of easy travel, after all, people can get around.  Bishop Black might touch down in Sodom, in scorn of God, but only after he has supinely accepted the heresies that make Sodom conceivable to him; and then he takes the Eucharist in hands that smell of that foul city in an act of blasphemy.

But he cannot rest there.  His fundamental “creative” sin must remain always in act; there is in fact no end to it, nor can there be.  So he weaves about himself a web of sinners of like mind, and this is preeminently the sin of simony, which in this instance is to replace the bride of Christ with a male in drag, and set him about to pander and procure.

It would be cleaner just to sell the mitre and crozier for good old ill-gotten money.  But all of this is to commit treason against Christ, who gave His life for the Church, to have her as his bride, pure and without spot.