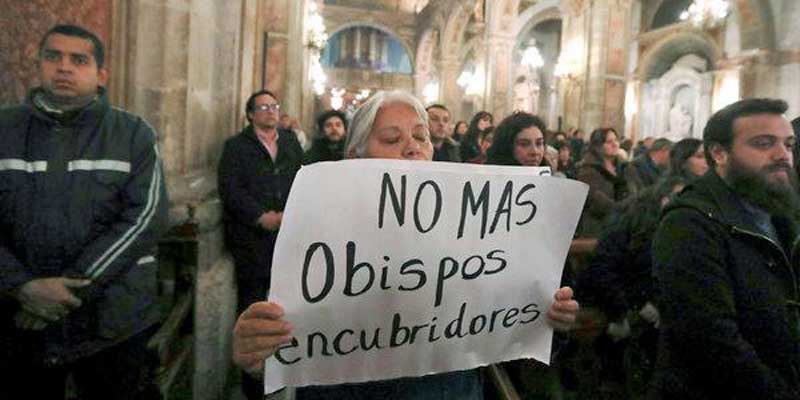 Chilean prosecutors are currently investigating 126 Catholic clergy or members of religious orders accused of sexually preying on minors and adults, following an explosion of protests over Pope Francis’ support of a Chilean bishop accused of complicity in sex abuse in January of this year.

As is the case in the sex abuse crisis in the United States, Canada, and Europe, the vast majority of purported victims are adolescent and young adult males, adding further weight to the view that the crisis is not primarily one of pedophilia, but rather of homosexual male pederasty.

According to Chile’s national public prosecutor’s office, the Fiscalía Nacional, the number of investigations underway has increased dramatically in the last three months, with an additional 70 suspects added to the total. The total number of cases under investigation has now more than tripled since July.

According to the Chilean newspaper La Tercera, the number of cases has swelled recently due to new discoveries of “dozens of files” of canonical cases regarding clerical sex abuse discovered in “key sites” of the dioceses of Rancagua and Santiago following raids conducted by police.

Chilean police have raided other diocesan facilities, including those of Valparaíso, Concepción, Osorno, and Chillán, in the last month, for a total of 16 offices raided in 2018.

La Tercera reports that the “principal” cases are directed against members of the country’s bishops’ conference who “would have had knowledge of abuses committed by prelates and which – they are investigating – would have silenced the victims to avoid going to the normal authorities and to [enable them to] relocate the accused.”

Prosecutors say that they have investigated a total of eight bishops since the year 2000. A large number of those are likely to be current cases.

The breakdown by age and sex of reported victims indicates that the sex abuse crisis in Chile is principally one of male homosexual pederasty and predation rather than pedophilia.

Also following the pattern in North America and Europe, the majority of accused perpetrators are middle-aged or elderly priests. Only 20 percent are under the age of 46.