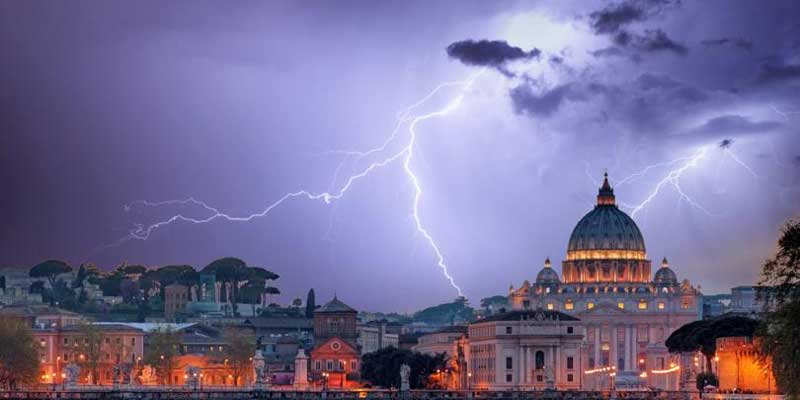 I would like to recommend a recently published interview with Bishop Athanasius Schneider by Theologian Dániel Fülep entitled “Catholic Church: Where Are You Heading?”  The interview has been published as an e-book which can be read in less than an hour. The wide-ranging interview covers a variety of subjects, as illustrated by the Table of Contents.  The introduction is included below in the hope that it will entice you to read the interview in its entirety.

“Master, do you not care? We are lost!” (Mark 4:38), the disciples in alarm woke Jesus sleeping in the boat tossed about by huge waves on Lake Genezareth.

The Catholic Church is facing difficult and extraordinary times these days. If ever, now is the time to declare that, according to the Catholic faith, not even a pope is entitled to spark off a revolution. This dramatic situation, however, is still largely ignored or not taken seriously enough by Catholics. It is partly because the mainstream Catholic media tend to conceal obvious problems. Painful details are simply left out. Reality is whitewashed or rewritten. It is not only those anomalies are glossed over or even promoted, but false doctrines are propagated, with the secular media gladly joining in. The world exults over any departure from tradition, secularization, changed and “modernized” doctrine with any negative phenomena making the headlines.

It is also true that many Catholics lack sufficient knowledge or – what is even worse – do not care about their faith. Modernist religion is subjectivist, emotionalist, separating faith and reason, ultimately leading to agnosticism, which reduces the truths and demands of faith to subjective feelings and to the current ideology of the world. That’s why the predominance of the heresy of modernism is largely ignored, although the symptoms of the current crisis of the Church already manifest themselves even in the most remote parish. Many Catholics, and even not a few priests and bishops are indifferent or even approve the crisis and they become appalled if someone tries to get them out of their comfort zone.

Painfully enough, the faithful are also ignorant because of the prevailing deep silence on the part of cardinals, bishops, and priests. It is only a few critics and those who practise papolatry, defending evidently erroneous decisions of the current Pope at all costs, that voice their opinions. Reasons for the silence: some warmly welcome the “change of paradigm,” others are quiet or confused due to insufficient knowledge or information or are personally interested in protecting their careers or positions, still others are at a loss, apathetic, indifferent, or fearful, tortured by the obvious contradictions. All in all, the faithful listening to sermons or receiving pastoral care are hardly ever confronted with reality, so they are not duly motivated to pray, fast, and do penance for their own sins and those of the world. Abandoned Catholics are like sheep without a shepherd, and they will understandably rejoice to find a bishop somewhere from the USA, Guinea, or Kazakhstan, who provides them with authentic Catholic guidance.

To help the dear reader better understand the questions put to Bishop Athanasius Schneider during the following conversation, I think I’ll first need to present the current state of affairs in the Church. The Vicar of Christ on earth can be judged by nobody but God. Formally, a pope can only be corrected by himself or by his successor. The content of his teaching, however, can be objectively assessed and he can freely be asked questions by anybody. False doctrine must be called false doctrine and, as such, it must be dismissed. And if the pope proves to be a tyrant rather than a guardian of faith, if the pope and the papal office come into conflict, if pastoral care is separated from doctrine, and relativism and situation ethics are gaining ground, we must step forward and act. Pope Francis calls all people children of God irrespective of justification and baptism, distorting thereby the true meaning of faith, love, and peace, suggesting equivalence of all religions, giving his approval to a practice which admits divorced and civilly remarried people, that is, adulterers, to Holy Communion. He redefines the ritual of foot-washing on Holy Thursday, speaking highly of Luther and his intentions, approving the reception of Holy Communion by Protestant spouses of Catholics, tolerating homosexual propaganda, and changing the teaching of the Catechism in a way that is in direct contradiction to Tradition. Moreover, he will not answer equivocally any doctrinal questions asked by cardinals, bishops, priests, and laymen. This list of anomalies, which is not exhaustive at all, only illustrates the serious crisis primarily of faith that we are facing now.

It is important to note that the Pope has primary but not exclusive responsibility: the current papacy is not a standalone phenomenon but grows out of a chronic crisis – that is to say, the problem is even greater and deeper than what it may look at first sight. And as the enemy is already embedded in the highest circles of hierarchy, the current situation requires unflinching self-defense by faithful Catholics. We must be aware that “the wickedness and snares of the devil” are to rob us of our eternal salvation.

First and foremost, this must make us even more determined to live a saintly life with a special focus on prayer, fasting and doing penance for the sins committed by ourselves and others. Facing the current trials, all of us will soon reach a crossroads: we must be strengthened to adhere steadfastly to the entire deposit of faith (depositum fidei). We must avoid being deceived by manipulations and false teaching. Thus, we must not only pray and receive the sacraments, but we also need teaching, guidance, and exhortation by bishops. That’s why I visited Bishop Athanasius Schneider and asked him again to clarify the current state of the Church and the world by answering highly relevant questions.

In the presence of his Excellency and listening to his words, I am filled with hope and certitude that the Lord Jesus is always with us in the boat of the Church just as he was once with the disciples on the stormy lake. Being close to the Lord, we will always be safe because He is the real and absolute master over the stormy sea of history. Jesus Christ is the head of the Church, who has the power to rescue us from calamities that, in human terms, seem to be beyond our control. Let every dear reader of this interview be filled with strength, clarity, and courage provided by the wise, true, and pure words of his Excellency Bishop Athanasius Schneider.

The Lord Jesus got up and calmed the storm. Then he said to the disciples, “Why are you so frightened? Have you still no faith?” (Mark 4:40)

Catholic Church: Where are You Heading?