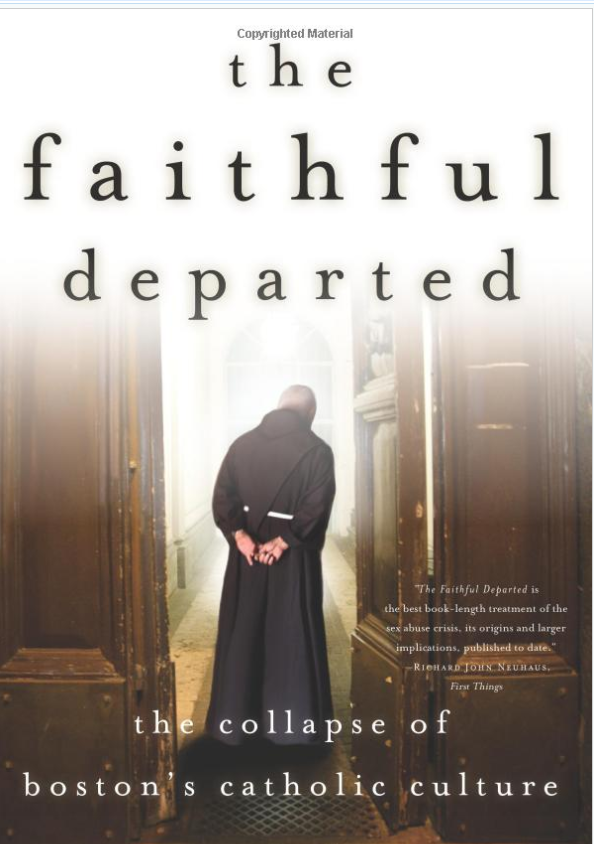 By Phil Lawler at Catholic Culture

“Why don’t you write a book about the McCarrick scandal?” my friend asked me. I answered: “Because I already did!”

True, The Faithful Departed doesn’t focus specifically on Cardinal McCarrick. But what this latest scandal has shown—the failure of the American bishops to hold each other accountable—was a major theme of that book, which was published ten years ago.

Here’s a sample of what I wrote a decade ago. Again it wasn’t written with the McCarrick case in mind. But it applies nicely, don’t you think?

The same corruption that produced the sex-abuse scandal, the greatest crisis in the history of American Catholicism, remains widespread in the Church today. Indeed the corruption is more firmly entrenched now than it was in 2002, because the hierarchy has refused to acknowledge the most serious aspect of the scandal: the treason of the bishops.

Reform cannot begin until the corruption is acknowledged. And since the American hierarchy apparently cannot or will not recognize the corruption with itself, other Catholics must call the bishops to account and demand the sort of responsible pastoral leadership that the American Church has not seen for years. Under these circumstances lay Catholics who criticize their bishops are not showing their disrespect for the bishop’s office. Quite the contrary, those who revere the authority of a Catholic bishop should protect that authority—if necessary, even from the man who occupies the office.

American bishops of recent vintage have shown little interest in the use of their legitimate teaching authority. When they teach, loyal Catholics obey. But when they do not teach—when they remain silent in the face of grave abuses—how should a loyal Catholic layman react? Our faith teaches respect for the office, not the individual. If the bishop neglects the duties of his office, then deference toward him is misplaced. A loyal Catholic should protect the bishop’s office by demanding that the bishop fulfills it. Failing that, a Catholic who loves the Church must demand that at a bare minimum his bishop refrains from debasing his office or bargaining away his authority to preserve his own comfort. Even if today’s bishop is unworthy of his office, his authority should be protected for the sake of his successors.

Eventually, as the Holy Spirit guides the Church, a worthy successor will arrive to lead the reform. Once again the history of Catholicism furnishes enough examples of successful reform to bolster hope in even the grimmest of circumstances. When St. Peter Canisius was sent to Vienna in 1552, for example, 90% of the city’s residents had abandoned the Catholic faith, and even among the remainder most were not actively practicing the faith. Many of the city’s parishes had no pastor, and not a single priest had been ordained for the diocese in 20 years. Yet the great Jesuit preacher rallied the faithful few, confronted the enemies of the Church, and led the restoration that made Austria a bulwark of Catholicism for centuries to come. Perhaps even now another great saint is waiting in the wings, ready to lead the Catholic restoration in Boston.

But that restoration, if it does come, will not come without cost. To restore vigor and discipline to the Church, Catholic leaders will be required to make personal sacrifices and unpopular decisions—and to ask their followers to do the same. That is the mark of Christian leadership: the willingness to imitate the Sacrifice of Christ.

Cardinals, the leading prelates of the Catholic Church, traditionally wear red: the color of blood, the color of martyrdom. Their vestments bear witness—theoretically, at least—to their willingness to make any sacrifice for the welfare of the faithful. Pope Benedict XVI recalled that symbolism in March 2006, when he raised new prelates to the College of Cardinals for the first time in his pontificate. “I am counting on you,” the Pope reminded the men to whom he was awarding red hats. He repeated the phrase frequently in his remarks at the ceremony: “I am counting on you.” In 2007, during a visit to the Roman academy that trains clerics for service in the Vatican diplomatic corps, the Pope made the same point how a readiness for personal sacrifice defines the nature of leadership in the Church. He told the aspiring diplomats that “whoever collaborates with the successor of Peter, supreme shepherd of the Catholic Church, is called to do his best to be himself a true shepherd: ready, like Jesus the Good Shepherd, to give his life for his flock.”