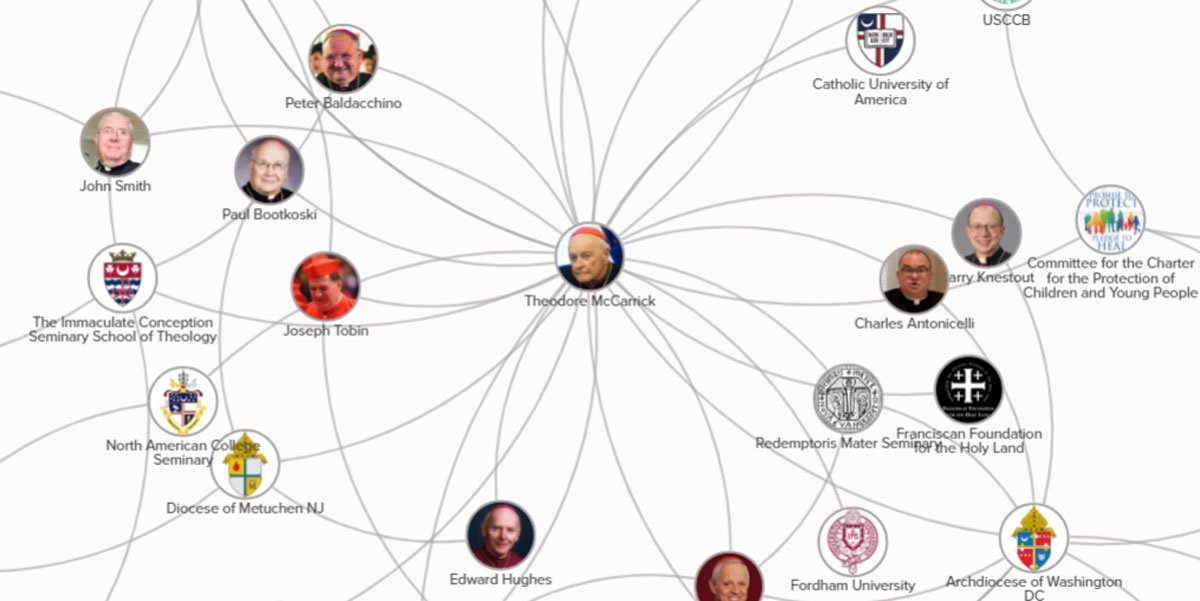 One obvious next step in the Cardinal McCarrick story is uncovering more victims of his abuse. We now know of two. I would bet that there will surely be more. But that’s not the most interesting or important part of the story.

The key now is to uncover the networks within the clergy and episcopate. Some of you might have seen the shocking story that reader Mark Crawford told in the comments section here in recent days. I found that he told the same story in testimony before the New Jersey legislature in 2004. Here’s a portion of that testimony:

Thank you for allowing me the opportunity to be heard today! My name is Mark Crawford, I am speaking to you today on behalf of my younger brother as well as myself, both survivors enduring more than four years of sexual, physical and emotional abuse by our parish priest, Father Kenneth Martin.

Fr. Martin was assigned to St. Andrews parish in Bayonne where I was attending catholic grammar school. He became very close to my family who were active parishioners. He often spent much of his time at my house rather than the rectory. My mother trusted him as a priest and believed he always had the best of intentions for us. He eventually began taking me on trips throughout the country, some for weeks at a time, including one to Europe. He brought me fine clothing and jewelry and would even give me money if I asked. It was on a train trip to Colorado when he first sexually abused me, I was 13 then. This continued several times a week for the next few years.

On the occasion of my 14th birthday, he became angry at something I had said. Too afraid to admit I said it, he took my younger brother and I to the basement to beat our bare backsides with a belt buckle. On another occasion, as I was walking him home to the rectory in the early morning hours, he wanted to talk about how I saw him in my life. When I told him that I sometimes felt more like his wife he hit me hard enough to knock me through a row of hedges and on a trip to Europe we physically fought as I would not sleep in the same bed with him, he won. Such outbursts of anger and physical abuse were not uncommon. At age 17 I moved out of the house and he began sexually abusing my younger brother. The effects on him have been far more devastating — his wife left him taking his children and his home. A once vibrant, energetic and hard working man, his deep, emotional scars have rendered him permanently disabled.

In 1983 I finally summoned the courage to tell the local bishop that Fr. Martin had abused me both sexually and physically and the he was probably doing the same to my younger brother. I never asked him for anything other than to remove Farther Martin from our parish and ensure he harms no other children. This bishop was quite irritated and did not treat me kindly. He insisted I meet with a priest at Boystown and explain everything to him in detail. At my last meeting with this priest, I was simply told to stay away from Fr. Martin and he would stay away from me. Of course that did not happen, they never removed him from my parish as I had requested. In fact, they never reported this man to the local authorities, as they were required to do by State law. After all. the penalty for not reporting is only $500.

After spending several more years in our parish, Fr. Martin was rewarded for his priestly abilities and appointed the Archbishop’s [Theodore McCarrick] personal secretary. After several years of service, he was returned to parish ministry as a pastor in the Oranges.

In 1996 my younger brother began to speak of his abuse. This was something I believed I managed to put behind me, I was wrong. My life began to unravel as fear of the truth finally coming out could and would cause irreparable damage to my family and our relationships. I began having nightmares and flashbacks the likes of which I would wish on no one. I began to see a therapist. No longer able to sleep or function as normal, I was suffering from posttraumatic stress disorder and depression.

I again approached the church but this time I retained counsel so as not to be ignored AGAIN. I was seeking a pastoral response but I received a legal one. They offered to pay for my therapy but stated this in NO WAY admits any responsibility. They also made it clear that any attempt at civil litigation would fail as Charitable Immunity protected them and the Statute of Limitations had already expired. Eventually the Church offered some money and repeatedly asked for a confidentiality agreement. I was outraged that they wanted my silence and made it clear I would never agree to any such condition of secrecy.

Finally, I insisted on a meeting with the Archbishop and he did meet with me. I asked that Father Martin not have access to children again and he assured me this would not happen. Several months later Father Martin was quietly returned to ministry as a hospital chaplain in Newark. I found this out when I saw his picture in the diocesan newspaper at Christmas time, he was surrounded by children. When I saw this I knew the Church still didn’t get it. These institutions had no incentive to change because they have been well insulated by virtue of this states Charitable Immunity Act.

Archbishop McCarrick hired a child molester as his personal secretary. Why?

Here is a sworn affidavit by Father Robert Hoatson of the Archdiocese of Newark, in a case in which he was suing the Church (including then-Newark archbishop John Myers) over wrongful dismissal. He believed that Church officials were retaliating against him for telling the truth about sexual abuse. Excerpts from that affidavit:

7. On page 2 [of the Newark Archdiocese’s court filing], I am described as being in opposition to church teachings and I am described as someone who brings disrepute on the church. My response is that there is no reference to any Church teachings that I have opposed. I have spoken out about sexual abuse by clergy and efforts to cover-up these crimes through illegal, unethical, and immoral behavior with respect to protecting, moving, or providing for those who have sexually abused children and others. The defendants have attempted to claim that I am a heretic when the amended complaint claims the retaliation and hostile work environment that I experienced does not involve church teaching and that I have not opposed church teaching. I also have spoken out on matters of public safety, my own abuse, and the abuse of children, and, as such, I have wide constitutional freedoms to express these beliefs. The defendants have not offered any reason for their severe adversarial employment action toward me except to say the Courts do not have jurisdiction.

8. On page 3, I am described as not agreeing with the church that homosexuality is a mental disorder. My response is that the Church refers to homosexuality as being objectively disordered, not a mental illness. The psychological associations of this country removed homosexuality from its list of illnesses several years ago. I have not preached or written in contradiction to the Church’s teachings. I have only set out contradictions and hypocrisy.

9. If the Church insists on calling homosexuality a mental disorder, than many of our leaders, politicians, and bishops are mentally disordered, because a sizable number of them are homosexuals, including the three bishops mentioned in this lawsuit [Newark’s John J. Myers, Cardinal Edward Egan of New York, and Bishop Howard Hubbard of Albany]. These allegations have not been denied by way of affidavit, and these claims were made to help explain why the bishops have not been able to police or monitor themselves and others, or why they might be compromised by their own personal behavior.