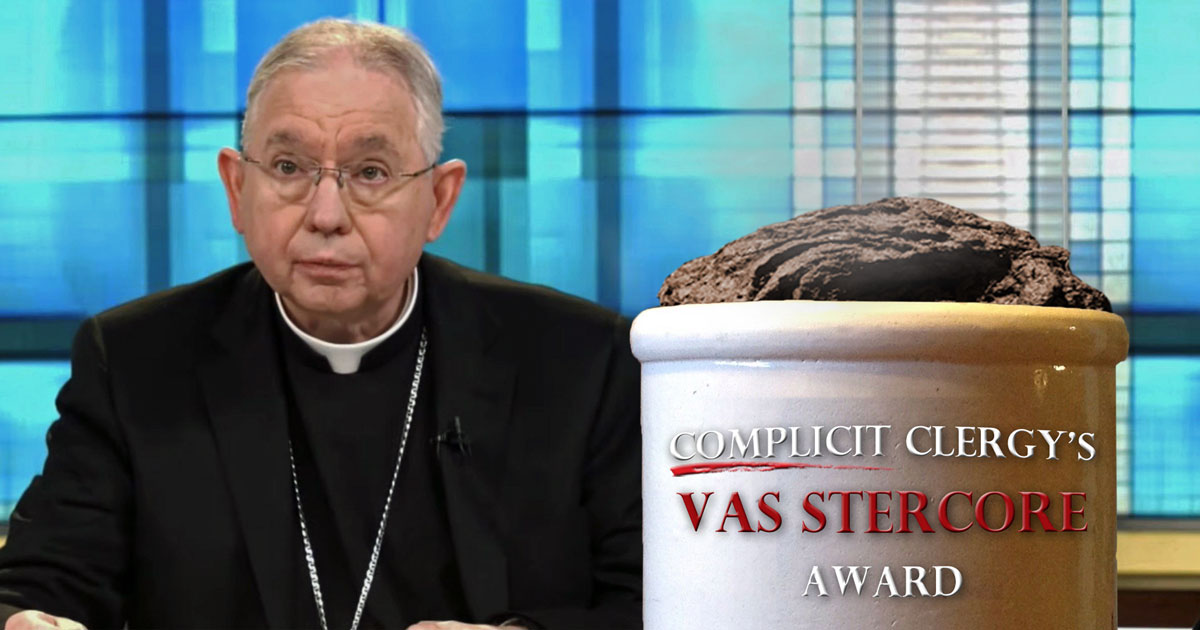 More politely known as “a pile of poo,” the term “a crock of shit” (“vas stercore” in Latin) is derived from an ancient Roman custom. It referred literally to a pot into which people would excrete if they were particularly bored by whichever freelance philosopher happened to be talking rubbish at the time.  The Roman Empire employed crock-monitors who were each assigned to a philosopher, and it was their job to monitor the pot (or crock). Should the crock become full, it would be presented to the philosopher, who was obliged, by law, to announce that it bore a remarkable resemblance to himself, thus proclaiming he was full of crap and was, in fact, talking a crock of shit.

Complicit Clergy has decided to begin awarding a “Vas Stercore Award” to bishops whose actions are especially notable.  Our first ever“Vas Stercore Award” goes to Archbishop Jose H. Gomez, Chairman of the United States Conference of Catholic Bishops (USCCB).  This week past week the USCCB conducted its annual fall meeting.  During the meeting, Archbishop Gomez told his colleagues that President-elect Joe Biden’s policy positions, including support for abortion rights, pose a “difficult and complex situation” for the church. In response, the USCCB decided to form a “task force” to address specific policies of President-elect Joe Biden that contradict Catholic teaching.

Just what we need; another meaningless task force that gives the appearance of doing something while nothing is actually accomplished.

FACT: Nearly all U.S. bishops remained scandalously  silent about Biden’s “troubling policy positions” before the election – the time when they could have actually done something about this problem by educating their flocks on Biden’s anti-Catholic policies.

FACT: The USCCB was among the first organizations to officially congratulate Biden BEFORE the election results had even been finalized, proclaiming him the nation’s second “Catholic” President.  Joe Biden is about as Catholic as Adolf Hitler. Archbishop Viganò SLAMED the U.S. Bishops for this action.

NOW the bishops want us to believe they are concerned about Biden’s “troubling policy positions” and that they are actually intending to do something about it?  Give us a break.

These unfaithful shepherds have DESTROYED the credibility of the Catholic Church in America.  If Archbishop Gomez really believes that faithful Catholics are buying this “vas stercore”, he is truly delusional.

TAKE ACTION: Contact Archbishop Gomez and let him know how you feel about the USCCB’s actions over the course of the 2020 election.