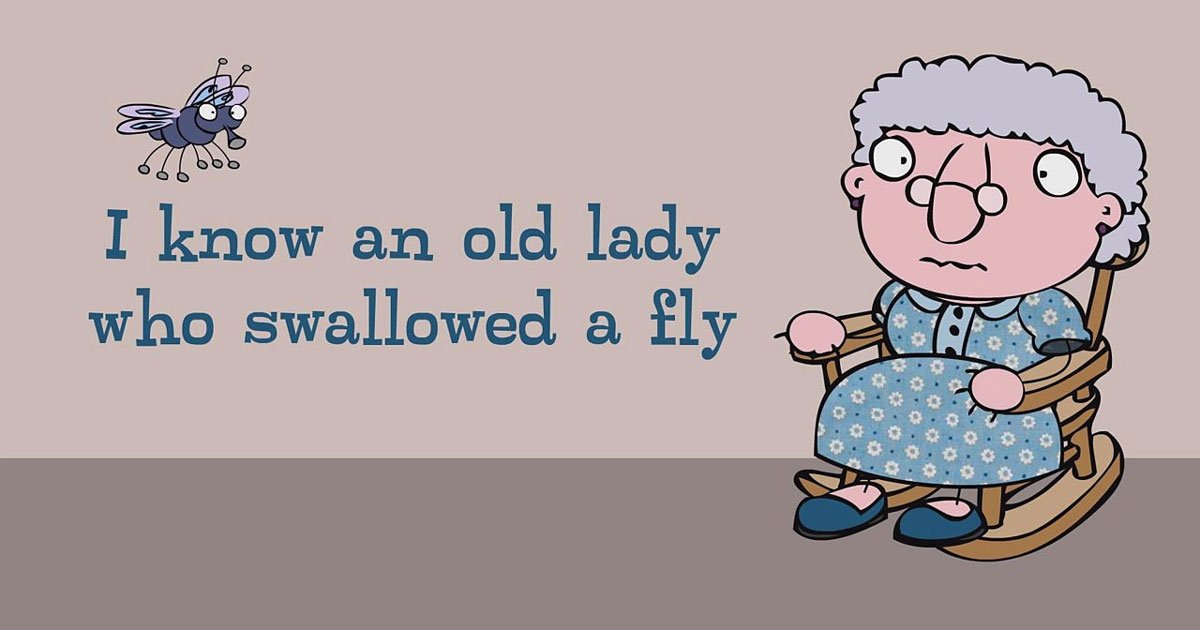 There’s an old nursery rhyme dating back to the early part of the previous century about an old woman who swallows a fly.  In the rhyme, because she swallowed a fly, she decides to swallow a spider in order to catch the fly.  But the spider tickles inside, so she swallows a bird to catch the spider, and then swallows a cat to catch the bird, and so on.

The silliness of the rhyme is found in the absurdity of swallowing bigger and bigger things in order to take care of one small fly, and in the end, she swallows something so big that she dies.

While the little nursery rhyme is a fun and playful story that make children giggle, there is some wisdom to it in the idea of a cure being worse than the illness.

Since the 1960’s, the Catholic Church has been in a constant state of flux, as interior motions and solutions create and build upon an ever-mounting pile of problems.

In 1965, it could be said that the Church swallowed a fly with the closing of the Second Vatican Council.  Though many claim (without any evidence of it having ever been said) that John XXIII convened the Second Vatican Council in order to “open the windows and let in the fresh air,” what happened in reality was the adoption of a new mode of ambiguity.  Church documents that could be interpreted in both an orthodox and a heterodox manner would become the source of a great deal of heartburn in the succeeding decades.  So, if indeed the windows were opened, what came in was a fly.

This fly was followed by the spider of syncretism in the form of interfaith dialogue.  Rather than drawing those following false religions into the One True Faith, the opposite effect occurred; once-faithful Catholics were leaving in droves.  In 1969, the New Mass was promulgated, and everything changed over-night.  The New Mass was designed in such a manner as to be more attractive to protestants, but instead of drawing in protestants, many Catholics felt betrayed and abandoned.

The thing is, syncretism of faith is inseparable from union with the world.  In other words, if the Catholic Faith is simply treated as a sort of first among equals (with other religions), then the Church’s moral authority in the world is automatically diminished.  As a result, the highest form of charity in the Church is no longer about bringing souls to Christ, but in performing merely material acts of charity.  And so, the rise of a Catholic-branded form of charity that was wedded to an idea of humanism had to come into being.  In this, we can say that the Church then swallowed the bird of humanistic charity to catch the spider of syncretism that was chasing the fly of faithful ambiguity.

But it doesn’t end there.  Once the absurd bird of humanistic charity flew in, it had to be caught by the cat of moral proportionalism.  Because humanistic charity is predicated upon the idea of saving lives instead of saving souls, rather than working to do both, the charitable works of the Church were forced to make compromises with the world.  No longer setting up missions and building the Body of Christ, professional Catholic charity-workers started working with institutions that viewed the elimination of children as the best means of fighting poverty.  They told themselves that if they didn’t work with these organizations, they would not be able to perform vital life-saving work.  The consequence of this was that a mentality crept in that contraception wasn’t as bad as AIDS, and that having fewer children wasn’t as bad having starving children.

So now, we have a cat of moral proportionalism chasing the bird of humanistic charity, which in turn is chasing the spider of syncretism, which was going after the fly of ambiguity.  Now comes the dog of indifferentism to chase after the cat.  Proportionalism deadens the soul to the sense of urgency for salvation and the fear of God.  In short, if some amount of sin is acceptable, then what’s the problem with sin at all?  If we see Catholics practicing contraception, and they aren’t hurting anyone, then what’s the problem with homosexuals having relationships, as long as they aren’t harming anyone?  But it doesn’t end there … Indifferentism invariably leads to the shirking of responsibility, which leads us to the goat of rebellion.

Since our Old Lady has swallowed all of these terrible things, one right after the other, the goat of rebellion is inevitable.  Indifferentism leads directly to disobedience.  When one is indifferent, they fail either to carry out the duties prescribed to them, or they flat refuse to perform their duties and profess hatred of them. And so, the goat of rebellion follows right on the tails of the dog of indifference.

So, it’s fitting that the goat of rebellion should be followed by the cow of paganism.  As the prophet Samuel told King Saul, “it is like the sin of witchcraft, to rebel: and like the crime of idolatry, to refuse to obey.”  Just as Aaron crafted a bull to be worshipped in the desert by the Jews while Moses was on the mountain, it is fitting that the cow of paganism be applied to the Church today.  At no other time in the history of the Church have we seen such a wide-spread rejection of both clerical and lay obligations to fulfill even the most basic of our duties as Catholics.  But nature abhors a vacuum, so the natural consequence of rebellion is idolatry for the worship of the True God is replaced by some other god, even if it is merely the self.

In the rhyme, after swallowing the fly, the spider, the bird, the cat, the dog, the goat and the cow, it ends with this line: “There was an old lady who swallowed a horse; …she’s dead, of course!”

The final end is the horse of judgment.  The punishment for the sin of idolatry is death.

Since October, wherein a wooden idol called “Pachamama” was venerated in the Vatican Gardens, paraded in the streets of Rome, and an earthen bowl representing Pachamama was placed on the altar of St. Peter’s, a previously unknown virus has been unleashed upon the world.  As a result of the virus, governments have shut down businesses and churches, bishops have withdrawn the sacraments, and an effort to create a global citizenship whose only passport is a vaccine to the virus is currently being discussed by global elitists.  And the response from the Church?

Today, led by Pope Francis, churches around the world are engaging in an “interfaith prayer,” which incorporates ambiguity, syncretism, humanism, moral proportionalism, indifferentism, rebellion and paganism all wrapped up into one single act.

By Michael Hichborn at the Lepanto Institute