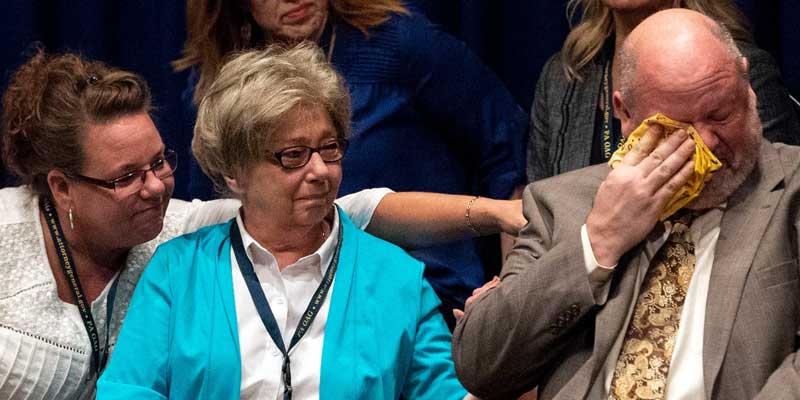 The Catholic Church is turning to outside arbiters to reckon with its history of sexual abuse. But skeptics argue that its legacy of evasion continues.

Some time before Brooklyn was incorporated into New York City, in 1898, it was dubbed the City of Churches. Houses of worship remain thick on the ground in the borough. In the part of Brooklyn where I live, churches outnumber grocery stores, pet shops, and nail salons together. There’s the Institutional Church of God in Christ (red brick, stained glass) and the Revelation Church of God in Christ (a converted movie theatre); the French-Speaking Baptist Church, founded by Haitian immigrants; the Zion Shiloh Baptist Church, whose members come from all over the metropolitan area, parking their cars in a long row; and the Ileri Oluwa Parish, where congregants of Nigerian descent worship shoeless and in long white robes. And there are the Catholic places. Queen of All Saints Church and Bishop Loughlin Memorial High School face each other across Lafayette Avenue. Up the hill is the walled-in motherhouse of the Sisters of Mercy; down the hill is the old church of St. Boniface, now the home of a community called the Brooklyn Oratory, where I go to Mass on Sundays.

A few blocks away is St. Lucy–​St. Patrick Church, on Willoughby Avenue. Over six years, beginning in 2003, Angelo Serrano, a religious educator at the church, sexually abused four boys. He raped or molested them in the church’s offices and at his apartment, in a brick schoolhouse converted to low-cost housing by Catholic Charities. Eventually, one of the boys told his mother, who told the police. In 2011, Serrano was sentenced to fifteen years in prison. The victims then sued the Diocese of Brooklyn; in a settlement reached last September, they were awarded $27.5 million.

My wife and I have been raising three sons in this part of Brooklyn, and the morning that the news about the settlement broke I cycled up Willoughby Avenue toward the church. St. Lucy–St. Patrick’s is one of the oldest Catholic churches in the borough, dating from 1843, and it has a haunted, left-behind aspect. On the edge of a row of restored brownstones, it is notably unkempt: pink paint is peeling from the doors, and the iron fence along the sidewalk is broken in places.

When I arrived, a correspondent from “Noticias Univision 41,” a Spanish-language news program, was standing nearby. A white car rolled up, the flag of Puerto Rico dangling from the rearview mirror, and a large middle-aged man stepped out, wearing a T-shirt, jeans, and sneakers. “If I had my way,” the man hollered, “he would get raped every night at that prison where he is, for what he done.”

Back at home, scrolling through BishopAccountability.org, which aggregates material about priestly abuse, I counted more than a dozen churches within easy cycling distance of our Brooklyn apartment that had been served at some point by priests accused of sexual misconduct. In Bushwick, Father Augusto Cortez touched a twelve-year-old girl’s breasts at St. John the Baptist Parish School. Father George Zatarga, long the chaplain at Bishop Loughlin, the high school on Lafayette Avenue, later admitted to “inappropriate behavior” with boys on trips to a cabin north of Albany (behavior he recorded lyrically in a “travel log”: skinny-dipping and the like). Father Anthony J. Failla, who served at St. Michael–St. Edward Church, near Fort Greene Park, was accused of sexually abusing a young orphan who slept in the rectory bedroom next to Failla’s quarters. Father Francis X. Nelson, while serving at St. Mary Star of the Sea, in Carroll Gardens, visited the home of a teen-age altar girl on the pretext of paying a pastoral call to her sick grandmother, and molested the girl. Father Romano Ferraro was posted to St. Francis Xavier, in Park Slope, after committing acts at other churches that later led to allegations of abuse; during his time at Xavier, Ferraro, on yearly Christmas visits to a friend in Massachusetts, raped the friend’s son (a crime for which he is serving a term of life in prison). A more recent incident caught my eye: in 2011, when my sons were in elementary school, the Brooklyn diocese removed Father Christopher Lee Coleman from the ministry for alleged sexual misconduct with a minor, though the diocese waited seven years to disclose its reason. Coleman had once been in residence at Queen of All Saints, down Vanderbilt Avenue from our apartment.

Like many Catholics, I wonder whether this story will ever be over and whether things will ever be set right. Often called a crisis, the problem is more enduring and more comprehensive than that. Social scientists report that the gravest period of priestly sexual abuse was the sixties and seventies, and the problem has been in public view for the past three and a half decades. For most American Catholics, then, the fact of sexual abuse by priests and its coverup by bishops has long been an everyday reality. Priestly sexual abuse has directly harmed thousands of Catholics, spoiling their sense of sexuality, of intimacy, of trust, of faith. Indirectly, the pattern of abuse and coverup has made Catholics leery of priests and disdainful of the idea that the bishops are our “shepherds.” It has muddled questions about Church doctrine concerning sexual orientation, the nature of the priesthood, and the role of women; it has hastened the decline of Catholic schooling and the shuttering of churches. Attorneys general in more than a dozen states are investigating the Church and its handling of sexual-abuse allegations. In February, New York State loosened its statute of limitations for sex crimes, long the Church’s bulwark against abuse claims. And that is just in the United States. Priestly sexual abuse has had grave effects around the world, including in Rome, where the three most recent Popes have been implicated in the institutional habits of concealment or inaction, and where Pope Francis has yet to find his voice on the problem.

Read the rest at The New Yorker