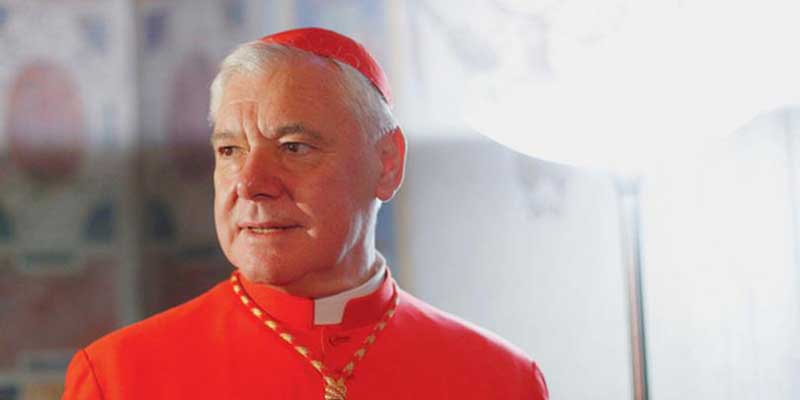 Recently, when supportively presenting to his diocese the new German guidelines concerning Communion for some Protestants, the German Bishop Felix Genn of Münster has claimed that “As pastoral caretakers, we do not have the right to allow or to deny access to the Eucharist. It is irreconcilable, strictly, to deny Holy Communion.”

As a direct response, Cardinal Gerhard Müller rejects this statement, saying that “it can also not be left up to the conscience of the Catholic or of the non-Catholic Christian to decide whether he wishes to receive Holy Communion.”

Cardinal Müller points out that in these cases, a priest might very well have to disobey an order of his bishop.

As LifeSiteNews reported on 21 November, Bishop Genn had published for his diocese a booklet on the pastoral care for marriages, in which he included the controversial German handout concerning Holy Communion for Protestant spouses as it had been published this June. Introducing the handout, Genn writes that he supports this approach and claims (on p. 24): “As pastoral caretakers, we do not have the right to allow or to deny access to the Eucharist. It is irreconcilable, strictly, to deny Holy Communion.”

LifeSiteNews reached out to Cardinal Gerhard Müller, the former Prefect of the Congregation for the Doctrine of the Faith, who has repeatedly opposed the idea of giving Communion to Protestant spouses of Catholics. In a recent interview in Germany, the prelate had even criticized the fact that Cardinal Reinhard Marx, in his private conversation, had received from Pope Francis a signature with which he gave approval for the publication of the controversial Communion handout of the German bishops. Müller then said: “For example, the reception of Holy Communion requires a full membership in the Catholic Church, but, nevertheless, someone has asked the Pope – so as to promote intercommunion – to sign a slip with theologically blurred assertions which contradict Catholic doctrine and the clear instruction of the Congregation for the Faith and which has led to a chaotic practice, with a great damage to the Church.”

In his response to LifeSiteNews, Cardinal Müller corrects Bishop Genn’s assertion that a pastor may not “deny access to the Holy Eucharist.”

“Bishops would undermine their authority, were they to demand obedience to violations against the natural moral law and false teachings in doctrinal and moral questions,” the German Cardinal told LifeSiteNews. He furthermore points out that there are cases where a priest has to resist his bishop, just as St. Paul resisted St. Peter: “In this case, each Catholic, and especially each pastor, is duty-bound – as St. Paul  toward St. Peter – to openly ‘withstand him to the face, because he was to be blamed’ (Gal 2:11). Unfortunately, we do not only have ‘pastors’ of the likes of St. Paul.”

Cardinal Müller makes it clear that a priest is not obliged to give Holy Communion to a non-Catholic. On the contrary, he is obliged not to violate “the sacramentality of the Church.”