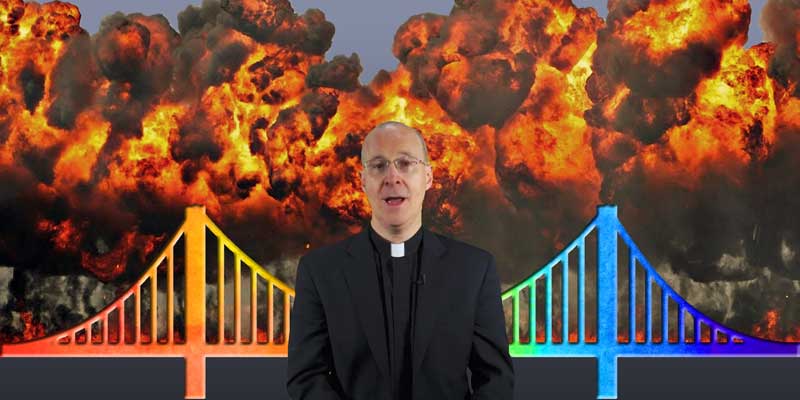 Expanding just a bit on last week’s discourse regarding the tête-à-tête between Bishop Joseph Strickland of the Diocese of Tyler, Texas, and Fr. James Martin, SJ — author of Building a Bridge and consultant to the Vatican Communications Office — it seems as if Strickland’s critique earned a rather lengthy response from Martin that is worth a deeper dive.

Charitably, Martin had the decency not to call Bishop Strickland a member of the “Catholic alt-right” for his defense of the Magisterium (duly noted). Nor did he call Gerhard Cardinal Müller a member of a vast neo-Nazi network for defending Church teaching (also, duly noted).

Martin offers two points. First and foremost, Martin insists that he is not attempting to change or alter the Magisterium’s teaching on the homosexual act, pointing to his rather long defense of Catholic teaching in the pages of America. Yet Martin insists that he is being misconstrued by his critics, a questionable claim indeed when his detractors are quite frequently calumniated (alt-right?) in the heat of argument or simply blocked on social media for their impertinence. Of course, one will admit that there are horrible people on the Internet, people who will say terrible things just to get a rise out of others (or in Internet parlance, to “own the libz”).

Yet Martin seems to have an increasing sensitivity to criticism that goes beyond banning trolls. Rather, it is his way of dismissing critics that is rather hot-headed and misplaced. One might think he would be overjoyed to explain to a faithful audience why he believes that the homosexual act is “intrinsically disordered” and uniquely so. Yet what Fr. Martin tells LGBTQI+A (did we get all the letters?) crowds is very much the opposite.

For good reason too — it’s precisely because the Gospel would be ill-received. Therefore, a Gospel-minus must be presented — Martin’s bridge — rather than 80 proof straight-to-the-gut truth. To this charge, Martin would perhaps nod enthusiastically. From the earliest days of the Society of Jesus, the Jesuit charism has been to bring Christ to people on their terms. This is true whether it is in India, China, Japan, among the Huron in North America, the Guarani in South America, or the tribes of sub-Saharan Africa. Thus we return to a “here comes everybody” thesis of Catholicism that we find in James Joyce’s Finnegan’s Wake.

But while Martin’s intentions may be well-placed in bringing Christ to a segment of Western society that is in many ways inimically hostile to Catholic teaching on the homosexual act, Martin seems to have inverted the argument Joyce was trying to make with an “everybody comes here” ethic. Thus Martin’s bridge is no bridge at all, but rather a tightrope. Martin feels the desire to reach out to a group of humanity that does not see or feel Christ, but likewise cannot bring himself to be entirely honest with that community about what the Catholic Church will eventually expect of those who are members of the Body of Christ.

Hence Bishop Strickland’s concern, which is bolstered by Cardinal Müller’s charge of a Catholicism that is being gnawed away by a “creeping atheism” based on a “false anthropology” that denies the creative concerns of God Himself — or simply put, that Pope Paul VI’s emphasis on the unitive and procreative qualities of the sexual act can be diminished or even eliminated through artificial means.

Martin bristles at the charge of creeping atheism embedded in what Mueller calls the “LGBT ideology” — arguing that sexual identity is as endemic to the human person as hailing from a racial background. Such a charge is refuted, says Martin, not only by the number of LGBT Catholics but by the extent of LBGT ministries in the Church. How can they possibly be atheists if there are ministries and members of those ministries?

Martin is correct about the stigmatization of those struggling with what Pope Francis has called the “colonialism of the mind” — namely, transgenderism and the willingness to bend one’s nature according to one’s concupiscence. Martin is perhaps correct that LGBT “sinners” are treated with a very different set of rules than other “sinners” in the pews guilty of greed, envy, lust, gluttony, sloth, acedia, and other such ills. Perhaps this is the case.

Yet perhaps it is also the case that — because homosexuality is such a uniquely postmodern question — that undue attention will indeed be brought to bear for no other reason than the Church has rarely seen a social phenomenon so rapidly consume the moral identity of so many in such a short amount of time.