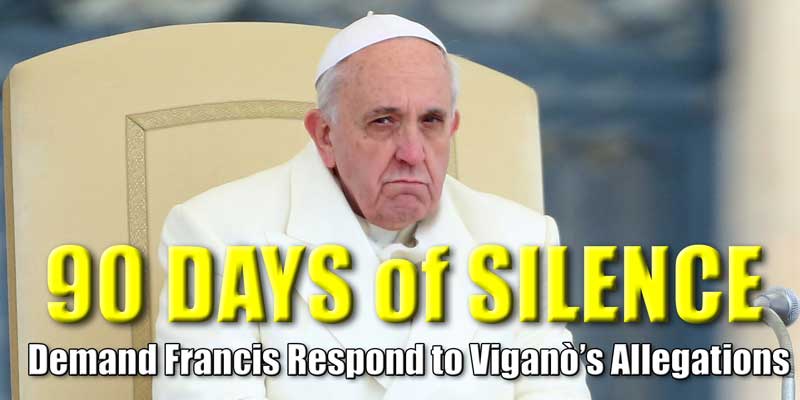 Today, Black Friday, marks the 90th day that Pope Francis has refused to respond to the serious charges leveled against him by Archbishop Carlo Maria Viganò.  Three months ago, Archbishop Viganò released his infamous 11-page testimony stating that Pope Francis had been complicit in the cover-up of the Theodore McCarrick sexual abuse scandal. When asked to respond to these allegations by a reporter, Pope Francis responded by stating, “I will not say a single word on this.”

Pope Francis possesses files on Theodore McCarrick that could refute Viganò’s allegations if they are untrue.  So why has he refused to release the documents?

TAKE ACTION: Ask Pope Francis to Respond to the Allegations

In his column last week, A Silent Vatican in a Time of Crisis, Edward Pentin states:

Whether it be the sexual abuse crisis, the Holy See’s recent landmark deal with China, or allegations raised in Archbishop Carlo Maria Viganò’s testimonies, the Vatican is often being subjected to a barrage of important questions from the faithful eager to have convincing, official explanations and answers. But usually these days, the Vatican’s response to these inquiries is obfuscation or, more commonly, silence.

Pentin makes the case that silence is not always golden:

It is therefore unsurprising that some in the Vatican perceive themselves as under frequent attack and often criticized. In the absence of creating an official and trustworthy narrative, the faithful cannot be blamed if they start to believe there isn’t one, and that the situation is perhaps as bad as it seems.

When the US Bishops sought to make some modest progress towards improving accountability in the sexual abuse crisis, Pope Francis was quick to silence them as well by forbidding them from voting on the measures.  As Msgr. Charles Pope stated in his column last week, Pope Francis owns this crisis.