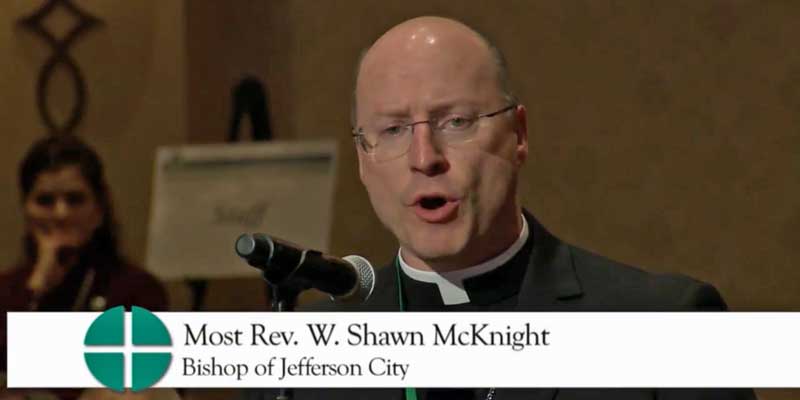 Bishop Sean McKnight of Jefferson City wrote this letter to his flock after the 2018 USCCB Fall Conference.

The November General Assembly of Bishops in Baltimore was a difficult but perhaps unavoidable experience for us to move forward as a Church. I was very disappointed to learn that the Holy See found it necessary to insist that the USCCB not take action at this time on the proposals presented by our conference leadership. My frustration, shared with many other people, is this: We have known about the scandal of Archbishop McCarrick since the end of June, and our Church must take immediate, decisive and substantive action in light of the deep wound the scandal has caused.

I am not so concerned about the time it is taking to punish the perpetrator. Pope Francis immediately required the Archbishop to resign from the College of Cardinals when Cardinal Dolan announced the New York review board found a credible and substantiated allegation of sexual abuse of a minor against him. I’m okay with the fact that further penalties (which could include McCarrick’s return to the lay state) will take more time for a complete canonical process. McCarrick isn’t going anywhere and he is already living a life of imposed prayer and penance.

But much more is needed than simply meting out a just punishment. How could his rise to such an influential position in the Church have happened? I am concerned how the national conference of bishops and the Holy See answer that question. An internal investigation of the McCarrick scandal without the use of competent and qualified lay investigators will hardly be considered transparent and credible. We need and must utilize the best and brightest people to do a top-notch investigation and study of the problem. Archbishop Charles Scicluna of Malta is the most qualified Catholic clergy to lead such an investigation, but without knowing that his collaborators include competent laity, the public may not perceive his eventual report as independent and complete enough to be believed.

At the time of this writing, there has not been one bishop, archbishop or cardinal in either the Holy See or the United States who has come forward on his own to repent publicly of his sins of omission or commission with regard to Archbishop McCarrick’s series of promotions over decades. Please, be men, not cowards, and come clean on your own! There doesn’t have to be a formal and long, drawn out investigation for a bishop to exercise a little compunction and concern for the well-being of the whole Church. An independent and transparent investigation is all the more necessary when culpable hierarchs exhibit an incapacity to do the right thing on their own.

The laity are the only ones who can keep the hierarchy accountable and get us out of the mess we bishops got ourselves into. My singular focus throughout the Baltimore meeting was to advocate and push for greater public involvement of the laity at all levels of the Church. Why can’t we have well qualified, nationally known and trusted lay experts named to the special task force announced by the president of the USCCB? We are too insular and closed in as a hierarchy, and so are some of our processes at the USCCB. The Second Vatican Council gave us not only the freedom but the obligation to utilize and engage the gifts and talents of the laity in the life and mission of the Church.

Beyond the McCarrick scandal, we have more work cut out for us with regard to putting into place protocols and institutional structures to build credibility in the hierarchy’s handling of sexual abuse cases going forward. History proves that we bishops are not capable of policing ourselves adequately on the issue of clergy sexual abuse. Why not include the laity to assist us with this problem? The document the Missouri Province of Bishops presented to the Committee for the Protection of Children and Young People on Oct. 6 was intended to offer a set of principles for the USCCB to consider as it was developing proposals for the full body of bishops, including the involvement of the laity. We Missouri bishops wanted something valuable to come from our November meeting.

And so, I was disappointed that even the mild proposals up for consideration at the Baltimore meeting had to be pulled from a vote. It was a rather harsh reminder to me of what many lay people have been saying throughout our Diocese: We bishops are ineffectual in our attempts to address the problem of abuse of power by the hierarchy. The Charter for the Protection of Children and Young People has had a marked impact on lowering the number of incidents of abuse by clergy since 2003. But with the aggravation of the McCarrick scandal, the laity and clergy are now rightfully asking that we get it all out, once and for all, and respond with an urgency that this crisis deserves. We literally have people dying because of the harm caused by predator clergy, and survivors of abuse are further victimized when we fail to take swift action. Seeing certain retired bishops who were notoriously responsible for covering up clergy sexual abuse at this year’s General Assembly in Baltimore as welcome guests was a slap in the face to all who have been wounded by the clergy. This example of episcopal arrogance and clericalism evidences the fact that we still don’t get the problem.

The whole Church is needed to solve our problem which the whole world knows about. What more do we have to hide? If we are going to move forward, we need to have authentic communion and a genuine synodal process. And this requires transparency and better communication between the clergy and the laity, between the USCCB and its own members, and between the USCCB and the Holy See. We need to become the Church Christ founded us to be.

Some of the most poignant comments I heard during the listening sessions in our Diocese were in response to the question asking for people’s dreams for their children and grandchildren. People spoke of a Church where their children and grandchildren would find the love, mercy and hope of Jesus Christ, a community filled by God’s graces and led by holy priests. Despite our current lethargy, I believe we are witnessing the rebirth and renewal of our Church in our day. And I feel very blessed to be part of that renewal with each of you. We are better together.