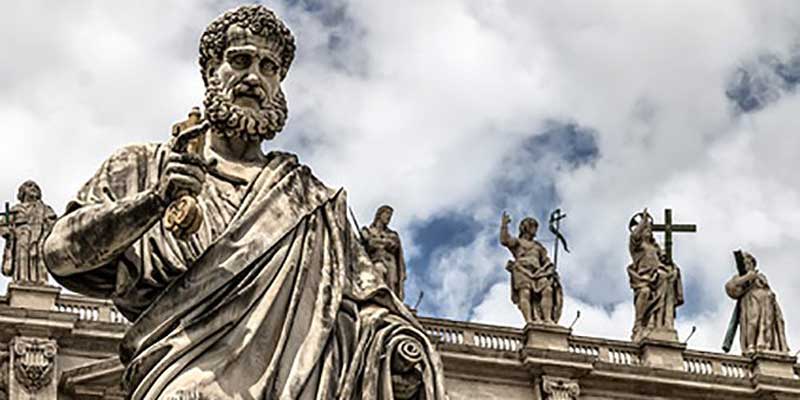 One salutary aspect of the troubling Bergolio pontificate is that it forces us to think about the papal office as such. This appeared plainly enough in the recent response of Cardinal Ouellet to Archbishop Viganò, suggesting (with pontifical approval) that the latter was out of communion with the pope. It also appeared in the Secretariat of State’s secret agreement with the Chinese government, in which canon 377 and the integrity of the process of apostolic succession were violated in exchange for a purely symbolic acknowledgment of the pope as titular head of all Chinese Catholics. It appeared, still more starkly albeit inconsequentially, in Fr Rosica’s notorious remark about the pope being above scripture and tradition and the Church now being ruled quite openly by an individual qua individual, as also in Bishop Carrara’s heretical claim that “God’s Spirit is embodying itself in Francis’s spirit.” It appeared in the Apostolic Constitution Episcopalis Communio of the Holy Father Francis, which carries forward the Bergoglian “conversion of the papacy” (EC 10; cf. Evangelii gaudium 32) by means of the putative transfer of magisterial authority from the pope to an ad hoc synod of bishops – a move intended to lend weight, for example, to the youth synod’s Final Report, which will be used further to convert the Catholic idea of the family and of the conscience, so that the latter also may stand above scripture and tradition.

In short, there is an awful lot of conversion going on here, as indeed there must be, given the quality of catholicity that belongs to the Church (Cyril, CL 18.23). Once you begin converting the plumbing, so to say, and you must renovate the entire house. But where better to begin than with the papacy itself, which John Paul II and Benedict XVI both thought must undergo change? That is exactly where the work began immediately after Cardinal Bergoglio’s election, following plans prepared in advance, and it has already been going on long enough now that it is impossible to simply stop it, were that desirable. Nor is it desirable, as the present sexual scandals and doctrinal deviations demonstrate; for the moral corruption on the seven hills and on the shores of the seven seas, which has so seriously infected and compromised the Church, began infecting it at least a century ago. Change was and is needed. But not this change.

True and False Respect for the Pontiff

To understand the Bergoglian conversion of the papacy we need to understand the larger crisis – many are at last admitting that there is a crisis – to which it belongs. That crisis is a concatenated one that has taken some time to break into the open. It involves, first, a loss of faith in tradition and a failure to stand fast (2 Thess. 2:15); second, widespread sexual immorality among the laity and the clergy; third, malfeasance in high office, including the papal office, regarding doctrine, discipline, appointments, and finances; fourth, a nexus of deceptions and cover-ups in which even the otherwise well-behaved have too often become enmeshed, despite the fact that “no prelate should desire that any good be achieved by a lie” (Aquinas, Super II ad Thess., C2, L1, 32); fifth, in service of those cover-ups a gross and, in some mouths, richly hypocritical distortion of respect for the pontiff, a distortion that does not stop short of substituting a false doctrine of communion such as that which appears in Ouellet’s letter; sixth, abandonment of the Great Commission in favor of a mission of inclusiveness, where “making disciples of all nations” decidedly does not mean “teaching them to observe all that I have commanded you” (Matt. 28:19f.); seventh, a deliberate plan to use the papacy to dissolve what is left of the centralized, authoritarian Tridentine Church and to overcome the synthesis of Vatican I and II that was attempted, with limited success, by the previous four popes – that is, to generate a decentralized, morally and doctrinally flexible, post-modern Church that is open both to Protestant and to pagan elements, with a vast and welcoming Courtyard of the Gentiles.

Obviously I cannot elaborate on all this here. I want to focus on the fifth feature of the crisis, which would not exist but for the first four and which is required by the final two. By “distortion of respect for the pontiff” I mean more than at first appears in the much remarked (and truly remarkable) statements reprised above. Anyone learning of them should not fail to be horrified by them, and by the tacit or open support they get from those who have spent much of their lives attacking Francis’s predecessors. But we should be no less horrified by those ordinary folk who are trying so very hard to convert their habitual respect for the occupant of the Chair of Peter into the kind of respect that is now being demanded of them – a respect that blurs the distinction between the person and the office and amounts, as I have said before, to a clericalism of one.